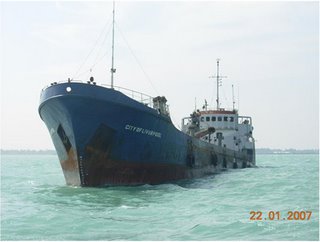 The Tamil Tiger rebels of Sri Lanka are not only taking hits from a military offensive being waged by the Sri Lankan governemnt, their "pirate-like" behavior is being used in a media campaign to disabuse the world of any idea that the Tigers are "fluffy bunny" renegades. One example of this media juitsu is found here:

The Tiger attack on the cargo ship "City of Liverpool MV” that transported food to Jaffna signals a serious threat to (1) international shipping in the Indian Ocean and (2) the supply food and essential items to the people of Jaffna through the sea route, according to analysts.

This is the second Tiger attack on ships within two weeks. On 23 December 2006, the Tigers hijacked FARAH III carrying 14,000 MT of rice from India to S. Africa. On Sunday, (21, January 2006) a cluster of Tigers boats approached "City of Liverpool MV” berthed in the Point Pedro Sea in an attempt to sink it. But a three pronged attack from air, land and sea drove the Tigers away. Two Tiger boats were completely destroyed. One Tiger boat managed to break through and hit the hull causing it to leak. Navy has rushed to repair the damage and take it to Kankesanthurai.

In the past, the LTTE has hijacked several vessels. Some of the reported cases relate to the hijacking of Irish Mona (August 1995), Princess Wave (August 1996), Athena (May 1997), Misen (July 1997), Morong Bong (July 1997), Cordiality (Sept 1997) and Princess Kash (August 1998). M V Cordiality, was captured by the LTTE and five Chinese crew were killed allegedly by Sri Lankan terrorists near the port of Trincomalee.13 Princess Kash, a Belize flagged general cargo vessel was hijacked by LTTE rebels, while on its way to Mullaitivu, a LTTE stronghold. The Sri Lankan Air Force bombed the vessel to prevent the ship's cargo falling into the hands of the LTTE. The status of the 22-crew members is still not known.

The Tiger attack on ships carrying food and essentials to the people of Jaffna is also seen as a deliberate attempt to create a food shortage and a humanitarian crisis which could be used to blame the Sri Lankan government. The Tiger tactic has been to block supplies of food to Jaffna and then complain to the international community that the Sri Lankan government is depriving the people of Jaffna food.

Previous post on the Sea Tiger attack on "City of Liverpool" here.

Given that the Tigers are given credit for initiating the modern use of suicide bombers and terrorist tactics at sea, they seem to be a group only their fellow Tigers can love.
Posted by Mark Tempest at 1/23/2007 10:10:00 AM