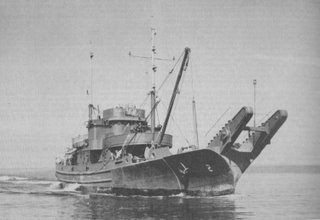 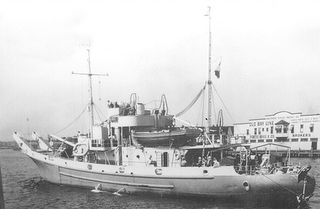 Why does that ship have horns on its bow?

How do you defend ports, harbors and the ships that are contained therein from submarines and torpedoes? Once answer was the development of anti-torpedo nets:

The idea of anti-torpedo nets rapidly followed the introduction of the locomotive torpedo. Experimenting against a hulk, numerous devices were tried out for catching torpedoes and rendering them harmless before they ever reached the ship. The most successful of these was galvanised wire net with an 8 inch mesh weighted at the foot and hung out around the ship from 40 ft booms; the depth of the nets when thrown out in to the water was to corresponded with the ship's keel, with the nets hung vertically whilst at rest and extended about 4ft above the water. In 1874 tests these nets arrested all torpedoes fired.

Efforts to block the entrances to harbors against surface vessels date back to the earliest times. The appearance of the high-powered, steel-hulled surface vessel, the submarine, and the torpedo have made the present-day problem of protecting ships at anchor increasingly difficult. The problem has evolved into one of defense against torpedoes. This defense is accomplished in two ways: by preventing the vessel carrying the torpedo from approaching within firing range, or by stopping the torpedo itself.
*** 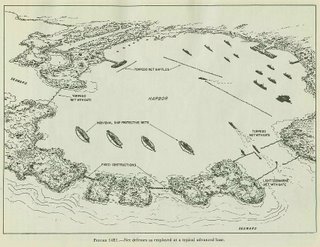 To protect ships at anchor in a harbor either (1) the harbor must be blocked off or (2) each ship must be protected individually. During World War II merely blocking off the harbor did not, in itself, give sufficient protection, because of the torpedo-carrying aircraft. Therefore, valuable ships and floating dry docks may be surrounded by a variation of the Type T net called an ISP (Individual Ship Protection) net. 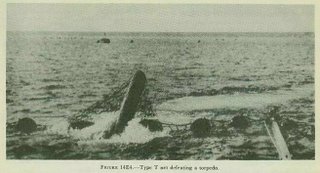 The above quote is from an interesting site Gene Slovers' US Navy Pages at which Mr. Slovers seems to have copied old Naval Academy texts. The illustrations to the left are from one of these texts, NAVAL ORDNANCE AND GUNNERY VOLUME 1, NAVAL ORDNANCE, CHAPTER 14
ANTISUBMARINE WEAPONS.

Well, all well and good, but how do you get the nets out there to do their job to begin with? The answer lies in a group of ships devoted to net laying, transportation and maintaining- net tenders (there were also Net Cargo Ships, but today we focus on the net tenders). A little background:

Six ship builders were given contracts to build the first 32 steel Net Tenders in the ALOE class. Most of the keels were laid in October 1940. They were all launched before the attack on Pearl Harbor.
***
Two Net Tenders were at Pearl Harbor on Dec. 7, 1941. They were USS ASH AN-7 (Ex YN-2) and USS CINCHONA AN-12 (Ex-YN-7), also Net Gate Vessel (YNg-17)...
***
After Pearl Harbor more Net Tenders were built. The next 30 ships, in the AILANTHUS class, were wooden and somewhat larger. The first keel was laid down in Oct. 1942, the keels of the last 15 steel ships, in the CAHOES class, were laid down in 1944 and 1945.

How did they lay nets?

NET LAYING BY NET TENDERS ONLY:
This was usually done when the following 3 circumstances were combined.
(a) Appreciable distance from Net Depot to point of Installation.
(b) Cold, foul weather where it was especially undesirable to work in small boats with Net Tender.
(c) A situation calling for the installation of a short piece of net in an out of the way place.

Where were nets used? Among other places, San Francisco Bay, where the nets came from the Naval 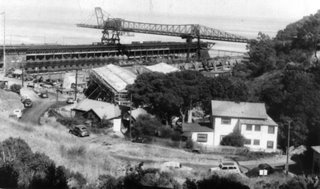 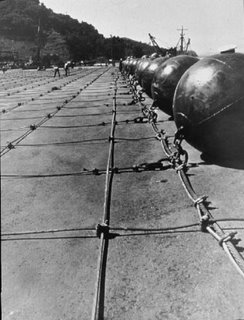 Local people still often call it "The Net Depot" much to the discomfort of the current owners. San Francisco Bay was one big Navy base as World War II loomed closer. It would have been wide open to Japanese submarines except for an anti-submarine net constructed at the Tiburon base and stretched across the Golden Gate. This seven mile long net was in place on December 7, 1941. The personnel of the Net Depot not only constructed over 100,000 tons of anti-submarine netting during the war but trained the sailors in the installation and handling of these nets which protected the harbors up and down the Pacific Coast of the U.S. and across the Pacific as well. The huge gantries left over from the coaling station were perfect for handling the giant nets.

After the war the nets were recovered and returned to Tiburon for storage in case of future need. Eventually, they were salvaged, the nets went to scrap dealers, the massive concrete anchors became bulkheads for shoreline protection at the depot and what is now Paradise Park, and many of the huge floats became beehives around California. The gantries were removed, leaving only the tracks on which they ran and a concrete trestle down the center of the base.

Where else? USS Butternut had an interesting career:

The ship departed Seattle on 17 May for a brief visit to San Francisco until 1 June when she got underway for the southwestern Pacific. After escorting SS Eldridge Gerry across the ocean, Butternut arrived in Noumea, New Caledonia, on 27 June. For 18 months, she tended nets in the southwestern Pacific, first at New Caledonia, later in the New Hebrides, and then in the Solomons. Her active service was interrupted only by two repair periods--August and September of 1943 at Port Chalmers, New Zealand, and November 1943 to February 1944 at Pearl Harbor. During her overhaul at Pearl Harbor, Butternut was reclassified a net laying ship and was redesignated AN-9. In January 1945, the ship steamed from the Solomons via Humboldt Bay, New Guinea, to Leyte in the Philippines. She spent the ensuing two years engaged in net and other district craft operations in the waters adjacent to the islands of Leyte and Samar. 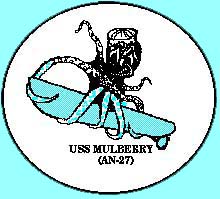 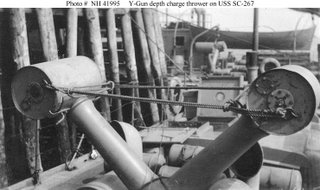 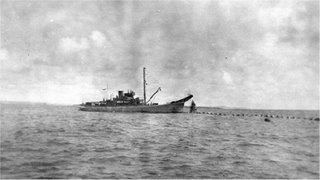 Butternut departed Leyte Gulf in convoy on 24 February 1947 and shaped a course for the Marianas. She arrived at Guam on 9 March and began three years of service in the Trust Territories of the Pacific Islands. Based at Apra Harbor on Guam, she carried passengers and cargo among the islands as well as laying and tending nets at various islands. The ship also performed several assignments off Iwo Jima laying mooring buoys and assisting in the recovery, repair and replacement of submarine lines. Butternut departed Guam on 19 June 1950 for repairs at the Pearl Harbor Naval Shipyard. The net laying ship completed repairs and put to sea on 15 September. Steaming via Guam and Iwo Jima, she arrived in Sasebo, Japan, on 28 October. The ship conducted operations at Sasebo and Yokosuka until 7 July 1951 when she set sail for Guam to resume her former duties in the Trust Territories.

Name a spot, and these little ships were there - including Kodiak, Alaska, where the net depot was known as Woody Island:

In October, 1942, a heavy indicator net for surface and under surface vessels consisting of 200' panels, was stretched from Woody Island to Shahafka Cove. If a 200' section of this net was carried away, the net vessel, equipped with depth charges, went into action. This net was approximately 1500 yards long with a 600' gate in the ship channel. It was opened and shut by two YP boats, one of which was on duty at all times. Equipped with anti-aircraft guns and radio these YP boats signaled the approach of all aircraft to Woody Island signalman, who relayed this information to the aircraft clearance tower on the base.

In November, 1943, anti-torpedo nets, 30' deep, for protection against the torpedo rather than the submarine, were substituted for the heavier nets installed in October, 1942.

In December, 1942, magnetic loop stations were installed at the entrance of the channel leading to Kodiak and at St. Paul's harbor...

Oh, yes, the net tenders were armed- a 3" gun, 3- 20mm guns and depth charge firing Y guns. And those horns? Look at the picture nearby to see how they were used in net work. 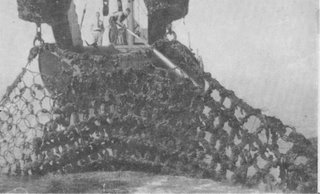 In addition to their net tending duties, these hearty little ships were used for salvage, cargo and other useful activities.

In addition to WWII service, many of these ships also served during the Korean War and a few served nearly 40 years.

One ship was lost when it hit a mine and others were damaged in storms. But all served faithfully and well, as did their crews.

And a special note of thanks to all the old net tander sailors who have shared their memories online and to
Robert (Bob) Cooper,Sr.. who maintains the site for USS Mulberry (AN- 27).