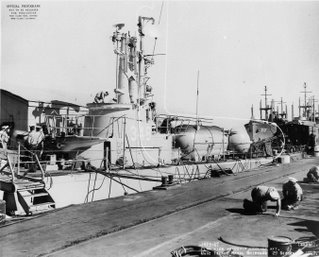 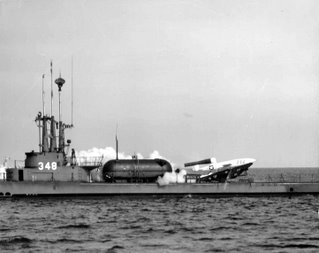 USS Cusk (SS-348) was the first submarine of the United States Navy (and perhaps the world) to fire a guided missile.

And it's due in part to the work of German scientists.

What those German scientists started with their rocket programs! Today there are ballistic missiles (submarine and land launched) , cruise missiles, and so on.

Once, however, there were the German rockets and a race to develop delivery systems for American and Soviet adaptations of a "proven" technology.

Both sides were also quick to take advantage of captured German V-1 and V-2 technology from World War II to begin development of both guided and ballistic missiles for tactical and strategic use, with the U.S. Army initially taking the lead in the United States. Not to be out-done, the U.S. Navy converted two World War II fleet boats, USS Carbonero (SS-337) and USS Cusk (SS-348) to carry a U.S. variant of the German V-1 pulse-jet missile, known as the Loon, first launched at sea in February 1947. Loon's nominal range under command guidance was approximately 50 nautical miles, but using a second submarine as a relay, it could be effective out to 135 nautical miles, with a reported Circular Error Probable (CEP) of 6,000 yards.

Soon a team of engineers, submariners, aviators and former German rocket scientists assembled at the Naval Air Missile Test Center, Point Mugu, California, to begin tests with the "Loon" - the Americanized V-1. Despite the simplicity of the bird (which was powered by a primitive pulse jet engine), it was clear that modifying it for submarine launch would be difficult. The first step threatened to be the most troublesome: how to launch the Loon off the tiny deck of a submarine. The Germans had used long catapult ramps to accelerate their missiles, and now engineers struggled to develop a rocket sled to achieve the same result in a minimum distance. Tests produced some spectacular failures as rockets exploded, sleds failed, and pulse jets stalled. Eventually however, the bugs were worked out and rocket launches of Loons became routine.

While rocket tests proceeded, another team of engineers tackled the complicated issue of how to control missiles in flight. The Naval Electronics Laboratory set about building a radio control system, using an existing radar beam. "Submarines had two radars: an air-search radar and a surface-search radar," says Captain Al Thomas, USN (ret.) who participated in some of the tests. "And they decided to modify the air-search radar so that you could send codes. You could make the missile go faster or slower or higher or lower, or right or left, or tell it to dive in." That made the Loon not just a flying bomb, but a true guided missile.

The World War II fleet submarine USS Cusk was then outfitted with a launch ramp and a missile control station. On March 7, 1947 Captain Fred Berry watched the action of the waves through the periscope. When the Cusk was in the trough of a wave, he gave the order to launch. Smoke from the rockets obliterated Berry's view as the Loon leapt off the deck. Controlled by the submarine and then by a chase aircraft, the missile was flown for several miles and "dumped" on a target. The Cusk had just made history.

As an aside, Steeljaw Scribe in his most recent "Flightdeck Friday" has a picture of a V-2 rocket being launched from the deck of a U.S. aircraft carrier. 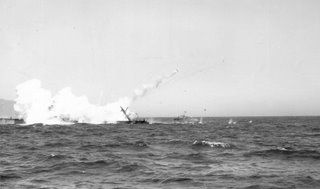 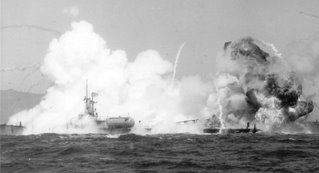 Things did not always go smoothly:

But on 7 July 1948, something went horribly wrong. "One of the rocket bottles exploded on the deck (of the Cusk)," recalls Thomas. "And the missile, which was full of JP-5, like kerosene, exploded and dove down on the deck of the submarine." Horrified onlookers saw the boat disappear beneath a towering fireball and smoke cloud. "Everyone thought the Cusk had sunk," remembers Captain Pat Murphy, USN (ret.) another Loon-era veteran. "But the Cusk's captain [Fred Berry] saw what happened through the periscope and saw that there was no hull rupture. Well, he submerged. They had all the water they needed to put out the fire."

The Cusk survived with minor damage. In 1949, she and a sister ship, the USS Carbonero, launched a missile attack as part of an exercise. Although the Cusk's Loon malfunctioned and crashed, the Carbonero's flew over the fleet, despite the use of radar, fighter interdiction, and heavy anti-aircraft fire. It was a terrific demonstration. But the Loon was not a practical weapon. Its payload and range were small, and new aircraft could out-fly it easily. "We were walking before we learned to run," says Murphy. "We were saying, this is what we can do, now give us the resources so that we can go do it." 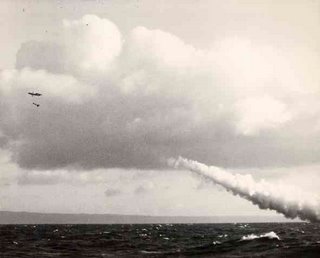 The Carbonero and the USS Cusk SS348 were selected to participate in the new Guided Missile Program in April 1947. Captured German V-1 "buzz bombs" were altered for remote control (renamed "Loons") and launched from a railing mounted on the after decks. The primitive control system consisted a modified air-search radar sending signals to speed up or slow down, go left, right or "dump" i.e. dive on the target.
These tests were conducted off Pt. Mugu, California and Oahu, Hawaii for several years and lead to the development of the Regulus Missile system. Carbonero later had the launching rail removed and became a guidance station boat, performing as an intermediate steering point on the missile's path to its target. The Regulus guidance equipment was removed in early 1962.

The Loon was the U.S. Navy's copy of the German V-1. The U.S. Army Air Forces' copy was designated JB-2. Intended for launching from ships against ground targets, the Loon had a pulse jet engine, a range of 150 miles, and was tracked by radar and controlled by radio. All Loons built were used in tests after the war. None were fired in combat.

The Loon was the Navy version of the JB-2, the copy of the German V-1 developed by the Army Air Forces (AAF) beginning in 1944. As with the V-1, the AAF intended the JB-2 to be a ground-launched missile used against ground targets. The AAF started flight tests in October 1944. The Navy developed interest in the AAF program shortly thereafter, intending to launch the missile from escort carriers with guidance from either shipboard or airborne radar.

Formally, the Navy's project was initiated under the Bureau of Aeronautics in April 1945 and at that time the missile was designated the Loon. (Initially, the Navy also designated the Loon as KGW-1 then in 1946 redesignated it as KUW-1.) The Bureau of Aeronautics received some JB-2s from the AAF, and in June 1945 contracted with Republic Aviation for 151 missiles. The XM-1 system (using a slotted tube powder catapult) was selected for the launching system.

The Loon was 27 feet long and had a wing span of 18 feet. It carried a 2,100 pound warhead and weighed 5,020 pounds with the warhead and fully fuelled. Powered by a PJ 31-1 pulse jet which developed a gross thrust of 850 to 900 pounds at a specific impulse of about 1,100 pounds per second, the Loon had a 180 gallon tank and could use any gasoline-type fuel. Control surfaces on the airframe consisted of rudder and elevators only. The Loon was tracked by radar to the target and was controlled by radio. Stabilization was provided by 3 air-driven position and rate gyros. An aneroid unit and magnetic compass controlled altitude and course through the gyro system. 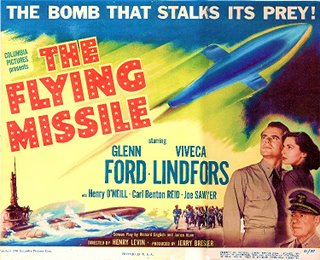 The Cusk website points out that the movie "The Flying Missile" (as opposed to what? "The Walking Missile?") was loosely based on the Cusk launches - and starred Glenn Ford, Capt, USNR. Launch video can be downloaded here.

Well, way back when. A salute to the pioneers of Cusk and Carbonero!

Top Loon launch photos from here (explosion photo attrib to Ric Hedman). Lower photos are of USS Carbonero from here.
Posted by Mark Tempest at 1/21/2007 11:22:00 AM