Intelligence at Sea: Vessels of Interest

The Strategy Page posts about the process of determining which ships become "vessels of interest" which are tagged for special watching here. (Note: Link may not work - if it doesn't, go
here and click on the link "Counter-terrorism:'Vessels of Interest' and the Usual Suspects"). 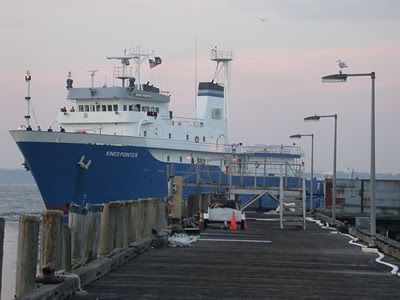 With over 50,000 ocean going vessels out there, that could make it to North America, the U.S. Navy and Coast Guard have developed techniques to deal with the situation. First, only a few thousand ocean going ships regularly visit North America. Most are huge cargo vessels or tankers, constantly moving back and forth between East Asian or Persian Gulf ports and North American destinations. These are easy to watch. So the navy has established a class of ships that get special attention. These are called “vessels of interest” (VOI). Some get included in this list because they carry hazardous materials (explosives or very dangerous chemicals)...

Obviously, the problem of seeking out ships is a little easier than identifying individuals because there are so many fewer of them. Also, because the U.S. has lots of water between it and most foreign ports, it is unlikely that a ship can "rush" across the ocean to surprise us. In fact, vessel tracking pays other dividends:

The search for VOIs has also uncovered a lot more nefarious activity on the high seas than the navy had previously suspected. While it was known that North Korea had been shipping illegal goods (drugs, counterfeit cash, weapons) around on its merchant ships, the VOI search uncovered much, much more. The North Koreans have been more active in gunrunning and smuggling illegal raw materials (ore, oil and lumber) out of Africa and Asian hot spots...

However, just because we have VOI doesn't mean, as I have been pointing out, that a non-VOI ship can't be hijacked and turned into a weapon for use against American interests and/or ships overseas.