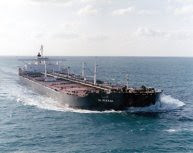 A Foreign Affairs article from November/December "Terrorism Goes to Sea" sets out some interesting information:

Since many shipping companies do not report incidents of piracy, for fear of raising their insurance premiums and prompting protracted, time-consuming investigations, the precise extent of piracy is unknown. But statistics from the International Maritime Bureau (IMB), a piracy watchdog, suggest that both the frequency and the violence of acts of piracy have increased in recent years. In 2003, ship owners reported 445 attacks, in which 92 seafarers were killed or reported missing and 359 were assaulted and taken hostage. (Ships were hijacked in 19 of these cases and boarded in 311.) From 2002 to 2003, the number of those killed and taken hostage in attacks nearly doubled. Pirates have also increased their tactical sophistication, often surrounding a target ship with several boats and firing machine guns and antitank missiles to force it to stop. As Singapore's Deputy Prime Minister Tony Tan recently warned, "piracy is entering a new phase; recent attacks have been conducted with almost military precision. The perpetrators are well-trained, have well laid out plans." The total damage caused by piracy-due to losses of ships and cargo and to rising insurance costs-now amounts to $16 billion per year.

Whereas land targets are relatively well protected, the super-extended energy umbilical cord that extends by sea to connect the West and the Asian economies with the Middle East is more vulnerable than ever. Sixty percent of the world's oil is shipped by approximately 4,000 slow and cumbersome tankers. These vessels have little protection, and when attacked, they have nowhere to hide. (Except on Russian and Israeli ships, the only weapons crewmembers have today to ward off attackers are high-powered fire hoses and spotlights.)

However, the article is from the Institute for the Analysis of Global Security whose work I have found on another occasion to be good, "but a little overly dramatic." I make the same minor complaint here. For example, whereas the following is generally true, the potential disaster of a scuttled ship in a narrow strait is a bit overwrought as I'll explain later.

If a single tanker were attacked on the high seas, the impact on the energy market would be marginal. But geography forces the tankers to pass through strategic chokepoints, many of which are located in areas where terrorists with maritime capabilities are active. These channels-major points of vulnerability for the world economy-are so narrow at points that a single burning supertanker and its spreading oil slick could block the route for other vessels. Were terrorist pirates to hijack a large bulk carrier or oil tanker, sail it into one of the chokepoints, and scuttle it to block the sea-lane, the consequences for the global economy would be severe: a spike in oil prices, an increase in the cost of shipping due to the need to use alternate routes, congestion in sea-lanes and ports, more expensive maritime insurance, and probable environmental disaster. Worse yet would be several such attacks happening simultaneously in multiple locations worldwide.

While there are some very narrow major waterways (the Bosphorus, for example - the U.S. Department of Energy produces a handy "chokepoint" list), for the most part, the Strait of Malacca is is 1.5 miles (7000+ feet) wide at its narrowest spot. Even a 1200 foot long ship placed sideways in that channel leaves some room to maneuver around it. The Strait of Hormuz is wider still. As we learned in the "tanker wars" these large tankers are hard to sink completely.

The Exocets and other small missiles generally failed to "kill" large merchant ships. They did, however, significant damage to 11 out of 17 tankers hit in
1984, which displaced over 50,000 tons, and slightly damaged six. The Exocets were more effective against smaller vessels, and against more complex or automated ships (the automated Safina al-Arab had to be written off because her machinery was too sophisticated to repair), and against ships where the hit happened to trigger a fire.

(Tanker War and the Lessons of Naval Conflict). Not that it can't happen.

And if it does, as the DOE puts it,

If the strait were closed, nearly half of the world's fleet would be required to sail further, generating a substantial increase in the requirement for vessel capacity. All excess capacity of the world fleet might be absorbed, with the effect strongest for crude oil shipments and dry bulk such as coal. Closure of the Strait of Malacca would immediately raise freight rates worldwide. More than 50,000 vessels per year transit the Strait of Malacca.

But any such closure would be relatively short-lived, given the incentives to salvage, raise or raze a ship interfering with the free passage through the Strait. How long would it take to clear such a ship? While the vessel didn't completely sink, in September 2003 the bulk carrier "Sea Liberty" was involved in a collision in the narrowest part of the Singapore Strait and was salvaged. 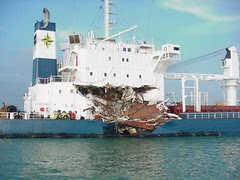 The Strait of Singapore in one of the busiest shipping lanes in the world, being the main seaway between ports in Europe and the Middle East and those in the Far East and South East Asia.

Singapore is the busiest port in the world with an average of 350 ships arriving per day. At any one time there are more than 800 ships in the port-a ship arrives or departs every 3 minutes. It is the focal port for some 366 shipping lines with links to 3,600 ports worldwide.

With congestion in many parts due to a daily traffic of 400 vessels on average, the Strait has become prone to ship collisions, oil spillage, strandings and sinkings. Therefore it is extremely important for ships to navigate safely in the Strait to avoid accidents which would adversely affect the three littoral states of Indonesia, Malaysia and Singapore and the marine environment.

These collisions and sinkings do not seem to interfere with other vessels transiting the Malacca Strait and its "subparts" such as the Singapore Strait.

Obviously, terrorism at sea is a serious threat and one that requires significant preventative measures. In the "worst case" scenerio, it is possible that some interference with international trade is likely. However, the probability of that worst case- a "perfect storm" of sea-going terrorism must be measured against other, more likely results.

Update: It occurs to me that since I have asserted that the seizure and scuttling of a ship in a narrow strait may not result in the shut down of the flow of world oil and other goods, it is incumbent on me to posit what I would be more concerned about Again, I am concerned with the "seizure and sink" scenerio but just not as concerned as I am with some other possible terrorist acts involving ships. These areas of greater concern include the seizure of a major ship and turning it into a weapon - very similar, in fact, to the seizure of commercial airliners and turning them into guided missiles for the accomplishment of an act of war. Note that I am distinguishing between "terrorism" and "war." Al Qaeda has not declared "terrorism" on the United States - it has declared war.

Osama bin Laden has a vision of his objectives in that war:

The principal stated aims of al-Qaeda are to drive Americans and American influence out of all Muslim nations, especially Saudi Arabia; destroy Israel; and topple pro-Western dictatorships around the Middle East. Bin Laden has also said that he wishes to unite all Muslims and establish, by force if necessary, an Islamic nation adhering to the rule of the first Caliph

cite. His strategy includes the economic crippling of the United States in such a way that it will be unable or unwilling to continue its presence in the Middle East. He seeks to raise the cost of our presence to a level beyond which we are willing to pay in blood and dollars. Part of his plan is to demonstrate the weakness of the U.S. and thus rally new members to the cause. 9/11 was both about hurting the US economy and showing that the "Great Satan" could be attacked. The joyous reaction in many parts of the world to the fall of the World Trade Center did demonstrate the power of the second prong. In my view, Al Qaeda needs another major "victory" against the U.S. As set out in prior posts, one such possible victory would be the attack and damaging of a major symbol of U.S. power - such as an aircraft carrier (the attack on the USS Cole and the failed attack on the USS The Sullivans show how much attacking these power symbols mean to Al Qaeda). In one of my posts, I indicated my major concern

What if the terrorists have or (use their speedboat tactics to) seize a "neutral" freighter or tanker and then use that ship as either a SIED (seaborne improvised explosive device) or as a "ram" to attack to attack our ships (for this purpose, I believe a tanker to be their preferred vessel because of the potential for fire and pollution and the attendant increase in publicity and spectacular television coverage -so for convenience I will use the word "tanker" alone to refer to this threat).

So, my concern is less with the damaging of international trade in the Malacca Strait (much of which flows to Japan and China) by blocking the chokepoints than with the use of such restricted areas (with limited maneuver room) as an area to engage in a vigorous attack on a prime U.S. warship in such a manner as to be visible to the world in an effort to rally more people to the Al Qaeda cause.
Posted by Mark Tempest at 2/25/2005 07:27:00 AM