“This could be one of the most important natural gas fields discovered in the last ten years,with significant long-term benefits for Mozambique.”

Benefits? From the Offshore report:


Mozambique's government was anxious for work on the project to start, he said, both for the incoming tax revenue in the longer term and for the near-term impact on jobs creation in the area. At peak, he forecast that construction of the initial LNG plant would involve 7,000 workers, with more employment opportunities for the second train.

***
Following meetings with local villagers, fishermen and farmers, Anadarko has filed an application for land to build the onshore reception and process facilities. The port of Ofungi is the chosen site for the LNG plant. "The nearby city of Palma only just received electric power for the first time last year, so there is potential for this project to change the area significantly," Vardeman observed. "Also, an aircraft landing strip will be built of sufficient size to land a 747 at least." At the coastal location, materials offloading and LNG loading facilities will be constructed. The proposed beach front site is large enough to accommodate LNG carriers turning, he said, although when the tide goes out a large area of flat sand appears.

Assuming the final investment decision is taken toward the end of 2013, first gas could flow in 2018. But this is a very competitive market, Vardeman noted, "and we must convince buyers that this will be a reliable source of LNG. Also, this will be our first LNG plant, so they need to count on us to be there a long time." On the other hand, Vardeman explained, having Bharat Petroleum, Videocon, and Mitsui as partners was helpful for marketing the Area 1 gas to India and Japan. "It's an optimal location, close to India, and the distance to Japan is the same as to Europe," Vardeman said. 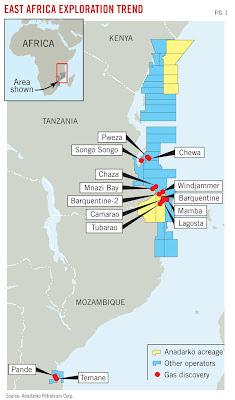 Oh, those horrible oil and gas companies, applying their technology in such a way as to benefit the poor of Africa.

LNG for Japan and Europe.

Another blow to the former gas monopolists in Russia.

Of course, there are those Somali pirates to deal with.