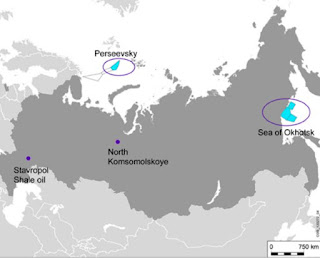 Reported by Ocean News, announced planned offshore Russia oil and gas exploration, including in the Barents Sea and the Sea of Okhotsk here:


Statoil will fund 100% of costs in the exploration phase, which includes an obligatory work program of six wildcat wells to be drilled during the period 2016-2021.

A fiscal reform package providing incentives for the development of Russian offshore , including through geological survey, was outlined in a Russian government decree of April 2012. Enactment and implementation of these measures will facilitate the conduct of more capital intensive exploration work.


The Shareholder and Operating Agreements are identical for the four license areas. Rosneft will have an equity share of 66.67% in each of the operating joint ventures and Statoil´s share will be 33.33%. Statoil will fund 100% of costs in the exploration phase, which includes an obligatory work program of six wildcat wells to be drilled during the period 2016-2021.

Statoil is a Norwegian company with world-wide operations. Rosneft is a Russian company, 75% state owned.


The Perseevsky license block is located in the western part of the Barents Sea. Prospective recoverable resources stand at over 2 bln toe.

The Magadan 1, Lisyansky and Kashevarovsky license blocks are located in the northern part of the Sea of Okhotsk. Prospective recoverable resources at these fields stand at over 1.4 bln toe.

One more step in the Arctic.