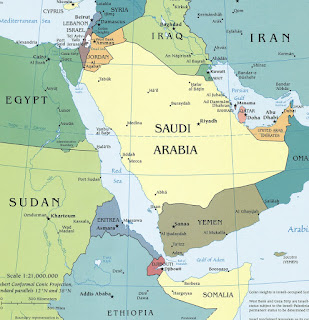 Bloomberg report, "Fighting Piracy Goes Awry With Killings of Fishermen", in which it is alleged that "Russian soldiers" riding a Norwegian ship fired upon and killed a Yemeni fisherman:


From 500 meters (1,640 feet) away, gunshots erupted from the tanker toward Quanas’s skiff and its unarmed fishermen. Two rounds pierced the water on the motorboat’s starboard side, and a third slammed into Quanas’s face, just under his right eye, according to survivors on the boat and a Yemeni Coast Guard investigation. As the bullet came through the back of his neck, Quanas moaned, held out a hand, collapsed and died.
***
Russian soldiers aboard the Norwegian-flagged ship fired the bullets that August day, according to a report from a private security team that was also on the tanker. The soldiers had been temporarily assigned to the Nordic Fighter by their country’s navy to protect the vessel as part of a Russia-led convoy navigating toward the pirate-infested Gulf of Aden, which some 23,000 ships use to move goods between Europe and Asia annually.
***
Quanas, who was about 38 when he died, is one of at least seven Yemeni fishermen who have been shot and among five killed since 2009 by soldiers assigned to deter pirates, according to records supplied by the Arabian Peninsula nation.
***
The Russian Navy denies responsibility for Quanas’s death, as does the company that owns the Nordic Fighter.

This incident is reported to have occurred in the Red Sea, placing it in interesting jurisdictional territory.

No one is being prosecuted, a noted in the Bloomberg piece:

Prosecutors in Norway decided against opening an investigation, in part because of the hurdles in taking soldiers to trial, says Siri Frigaard, chief public prosecutor and director of the Norwegian National Authority for Prosecution of Organized and Other Serious Crime. She said information in the file indicated the Russian soldiers fired their weapons, but declined to provide other details, citing Norwegian police secrecy laws.