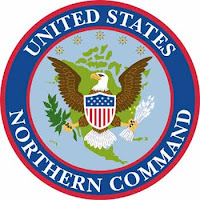 Join us on Midrats for Episode 140: NORTHCOM and Disaster Response:


Everyone knows CENTCOM, many know PACOM or EUCOM ... but what about NORTHCOM?

What is their role in national defense, and what special role does it have inside the United States - specifically in disaster response?

This Sunday, September 9th from 5-6pm EST, our guest for the full hour to discuss this and more will be Brigadier General Donald A. McGregor, the Deputy Director of Operations for Domestic Operations, Headquarters, United States Northern Command, Peterson Air Force Base, Colorado.

NORTHCOM has been busy with forest fires, hurricanes and a whole lot more as it works with civilian agencies in the disaster area. Because hurricane season continues, earthquakes never stop and who knows what else can happen on a major level, this is a timely topic.

Join us by clicking here on Sunday at 5pm (Eastern U.S.) or listen later to the recorded show by hitting that same spot or by visiting the Midrats iTunes page.
Posted by Mark Tempest at 9/07/2012 12:19:00 PM