When your model is proving to be wrong, insult the people who have a found a plan that works for them: Paul Krugman's Baltic Problem - By Anders Aslund | Foreign Policy 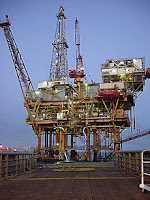 It’s not unrealistic to expect abundant oil and gas resources to help make North America energy independent within a decade, witnesses told a US House Energy and Commerce Committee subcommittee on Sept. 13.

“The United States has become the world’s second-largest oil producer,” said Harold G. Hamm, chief executive of Continental Resources Inc. in Enid, Okla. “We just passed Russia and are behind only Saudi Arabia. I don’t think a lot of people realize this.”

Hydraulic fracturing and horizontal drilling have helped the US reduce its crude oil imports from 60% of its total consumption a few years ago to 45%, he told the committee’s Energy and Power Subcommittee. US natural gas reserves have grown from a 7-year supply to one that’s more than a century, Hamm added.

“The technology that allows us to drill 2 miles down, turn right, go another 2 miles, and hit a target the size of a lapel pin has unlocked the resources that make energy independence a reality,” he said.


Iran is complaining about "terrorists" in Syria receiving shipments of weapons from stocks in Libya. "Terrorists" being those who oppose the Iranian-supported Assad regime. Irony knows no bounds.

Especially since About Those Blacklisted Iranian Ships Calling at Libyan Ports...:


Over the past two months, at least three Iranian-linked container ships, all blacklisted by the U.S. Treasury, have called at the Libyan port of Benghazi.
***
The U.S. government has described Iran as the world’s “leading state sponsor of terrorism.” The U.S. State Department, in its most recent annual report on terrorism, released in July, noted that Iran had “increased its terrorist-related activity, likely in an effort to exploit the uncertain political conditions resulting from the Arab spring.” The same report noted that “Iran continued to provide financial, material and logistical support for terrorist and militant groups throughout the Middle East and Central Asia.” This includes “weapons, training and funding” for Palestinian terrorist groups, and “weapons and training” to help Syria’s Assad regime in a crackdown that has cost many thousands of lives.
***
In remarks Wednesday on the deaths of American personnel in Benghazi, Secretary of State Hillary Clinton reaffirmed that “A free and stable Libya is still in America’s interest and security, and we will not turn our back on that.” Surely, regardless of who was behind the Sept. 11 attack, the aspirations for a free and stable Libya are better served without the presence of blacklisted IRISL vessels dispatched from terror-linked ports in Iran.


Drug submarines continue to make news,
Use of sophisticated drug subs spikes in the Caribbean. There was a time when such drug running subs where operating only in the Pacific. Things change, but the threat is high:


American authorities have recently discovered at least three models of a new and sophisticated drug-trafficking submarine capable of travelling completely underwater from South America to the United States, and the use of these covert vessels has spiked in the Caribbean over the last year.

Older models pressed into service by drug barons were only semi-submersible, requiring a snorkel for air intake, but three newer captured vessels were fully submersible, capable of hauling 10 tons of cocaine and, by surfacing at night to charge their batteries, could sail beneath the surface from Ecuador to Los Angeles.
***
“These vessels are seaworthy enough that I have no doubt in my mind that if they had enough fuel, they could easily sail into a port in the United States,” according to Cmdr Mark J Fedor of the US Coast Guard, who commands the cutter Mohawk, a 200-foot vessel whose fast boat and helicopter interdicted a submersible in the Caribbean last September.

Last year, interdiction missions coordinated by the joint task force captured 129 tons of cocaine en route to the United States — more than five times the cocaine seized over the same period by operations in the United States, where agents and officers stopped about 24 tons of the drug.

Despite these advances, three-quarters of potential drug shipments identified by the task force are not interdicted, simply because there are not enough ships and aircraft available for the missions. “My staff watches multi-ton loads go by,” Admiral Michel said.

Though I think it is safe to assume the drug kings would rather have a healthy U.S. economy to allow their profitable business to grow rather than a even more wounded U.S. . . .
Posted by Mark Tempest at 9/15/2012 03:24:00 PM