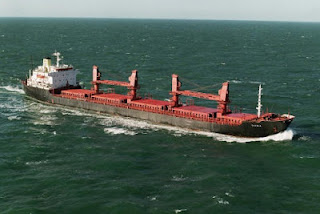 Reported as a deadly temper tantrum from a thug in Somalia as in "Pirate boss: Somali pirates kill Syrian hostage and wound another over delayed ransom payment""


Somali pirates who have been holding a hijacked ship for nearly two years killed a Syrian hostage crew member and wounded another to protest delayed ransom payment, a pirate leader said.

This is believed to be the first time Somali pirates have killed a hostage because of a delay in ransom.

Hassan Abdi, a pirate commander in Haradhere town, a key pirate centre, said Friday that the killing on Wednesday was a message to the owners of the ship MV Orna that was hijacked off Seychelles in 2010.

"The killing was a message to the owners of the ship who paid no heed to our ransom demands," Abdi said by telephone.

"More killings will follow if they continue to lie to us — we have lost patience with them. Two years is enough," he said angrily.

The MV Orna is a Panama-flagged, bulk cargo vessel owned by a company in the United Arab Emirates.