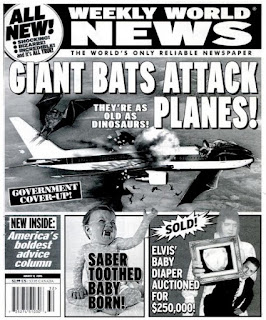 Iranian press releases concerning their military capabilities never cease to amaze - much like the lurid covers of the lamented World Weekly News - the simple absurdity of the puffed up claims is, if nothing else, captivating.

“We have the capability to hoist Iran’s flags in different regions from the North Pole to the South Pole and we are preparing plans for presence near the South Pole,” Sayyari said on Friday.

Well, since the South Pole sits on top of a rather large land mass, covered with ice 2700 meters (9000 ft) deep, the Iranian Navy must have some really special ships.

If he means Iran has ships that can sail off the coast of Antarctica, so do the clowns of Whale Wars, and pretty much every other sea-going county in the world. All of which points out how modest these plans are, I suppose. Might as well announce plans to go to the grocery store. As far as I can tell, there is no one standing in their way.

The real question is why the Iranians would want to make the effort to go to polar regions. For that, I have no answer, unless it's "because they are there."

Of course, the Iranians also plan to expand their force to provide protection for the U.S. coast by patrolling the Atlantic, though they seem to couch it in different terms:

We know it is "peaceful" because they keep reassuring us that is the case:


Tehran has repeatedly clarified that its military might is merely based on the nation's defense doctrine of deterrence and poses no threat to other countries.

So, if they are not a threat, they must be planning to put a force off our coast in international waters to lend us a hand in patrolling the sea lanes of commerce to keep them open for free commerce between nations of good will . . . .

The Iranian Islamic Revolution Guard Guard Corps Navy also likes to provide tales of their heroic prowess to gullible minds. Here's an example of a joint press release from the IRGCN itself:


Iran keeps a watchful eye on naval moves of the enemies in the region and is fully informed of all their military actions due to its intelligence supremacy over the enemies, a senior commander of the Islamic Revolution Guards Corps said.

"We have good intelligence and security supremacy over enemies' moves in the Persian Gulf given our modern and advanced equipments, and our operational and intelligence patrols deep into the Persian Gulf have increased the capability," Commander of the IRGC's Second Naval Zone General Ali Razmjou told reporters in Iran's Southern port city of Bushehr.

He said that the Persian Gulf has become "an unconquerable stronghold" for Iran, but at the same time noted that Iran's military capabilities are only meant to promote the country's deterrent power.

Iranian Navy Commander Rear Admiral Habibollah Sayyari had also earlier this week stressed Iran's intelligence supremacy over US moves in the region, and noted that Iran is well informed of the details of the US naval moves in the region.

"We are well aware of the exact number and the position of the US surface vessels, aircrafts, submarines and minesweeping warships in the region," Sayyari underscored on Friday.

You know, for a peace loving country the Iranians seem to have lots of "enemies."