China: A South Atlantic Pivot? Base rights in Southwest Africa?

If the U.S. is doing a "Pacific Pivot," is China countering with expansion into the South Atlantic?

The Diplomat asks Is China Secretly Building a Navy Base in Africa?


Writing for Real Clear Defense, Robert C. O’Brien explores reports that China is looking to build an overseas naval base in Namibia. O’Brien notes the historical strategic importance of Walvis Bay, Namibia’s sole deep water port, adding that the South Atlantic is generally “below the radar of most policy makers today.” If the PLA Navy does construct a base at Walvis Bay, he writes, “It would have the ability to patrol the critical Cape of Good Hope around Africa and Cape Horn around South America. The approaches to the key North Atlantic sea lanes linking the Americas, Africa and Europe would be nearby.”

Mr. O'Brien's piece is China's Next Move: A Naval Base in the South Atlantic?:


During my visit to Walvis Bay, China's plan to build a naval base was the talk of the town. Several Namibians pointed out that China already has a major satellite tracking installation in-country. China is developing key uranium mines. Chinese immigrants are opening shops in every corner of the land. A Namibian told me he would not be surprised if Namibia soon elects its first Chinese member of parliament. One local, who works at the harbor, said he has heard the PLA Navy will deploy four to six warships to the prospective base. Once that happens, he said, Namibia becomes, in essence, a Chinese colony.

David Tweed had this story back in November 2014 at Bloomberg reporting on an article from the Namibian, China Mulls Building Naval Base in Namibia, Namibian Times Says. The Namibian report from Nov 19 2014 is "Chinese naval base for Walvis Bay" by Adam Hartman:


According to reports in the Chinese media, Walvis Bay will be one of 18 naval bases that will be established in various regions: Pakistan, Sri Lanka and Mynanmar in the northern Indian Ocean; Djibouti, Yemen, Oman, Kenya, Tanzania and Mozambique in the western Indian Ocean; and Seychelles and Madagascar in the central South Indian Ocean.

As the Tweed piece notes, however,


The Namibian Times report was based on an unofficial Chinese Internet report and was “inaccurate,” “exaggerated” and therefore “groundless,” Defense Ministry spokesman Geng Yansheng said at a monthly press conference in Beijing today, according to a transcript of his remarks. Geng didn’t say which parts of the report, if any, were accurate.

The game's afoot. And it's a big one. 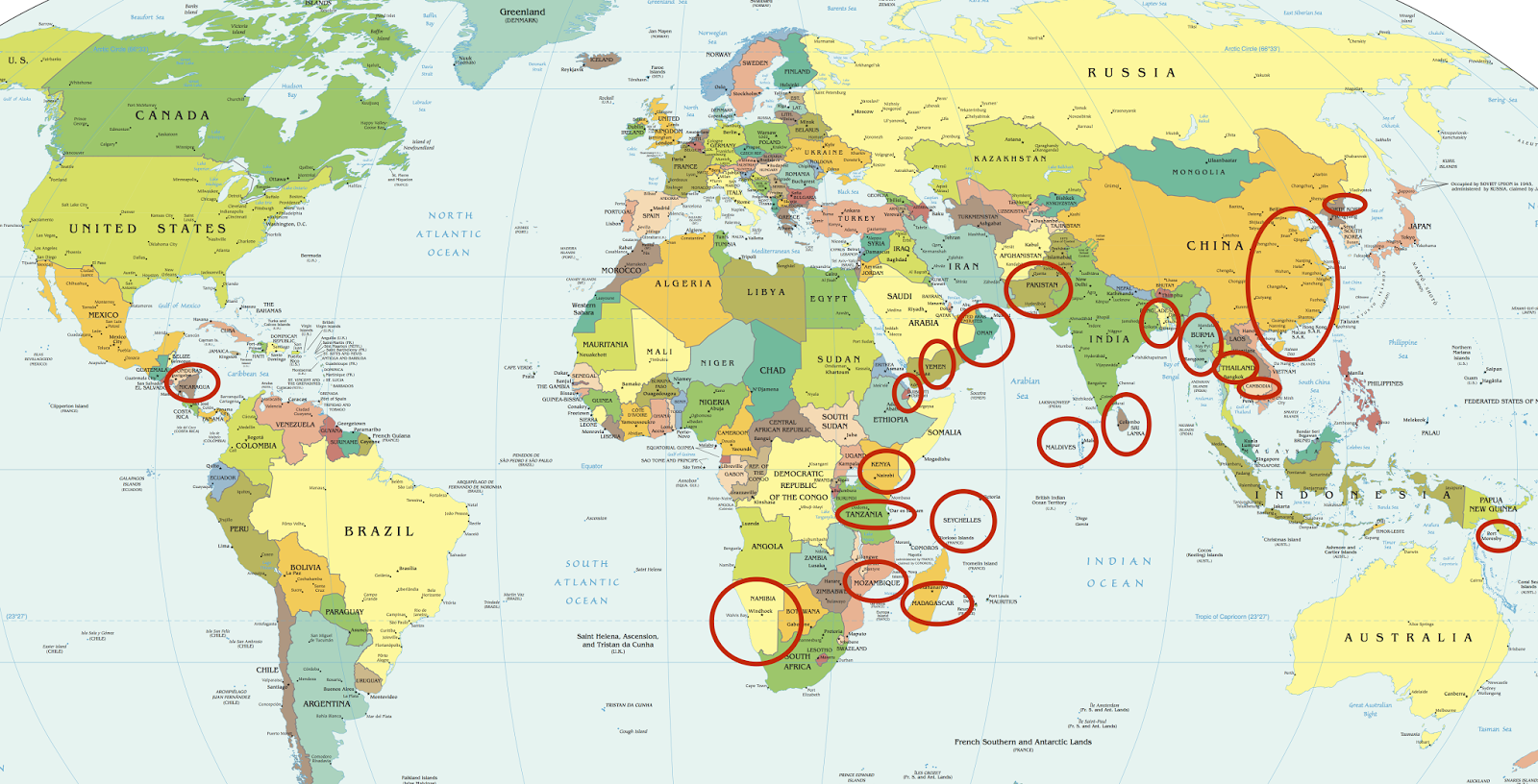 As seen on the above map, the Chinese, if the reported "naval base" list is correct, would build an interesting string of ports available to them. The listed countries that would host bases are under the red ovals. I added China and I added in the Nicaragua canal that it appears the Chinese may fund/engineer/build.

IN 2013 there was this report, China’s moves in Western Hemisphere have U.S. stepping up its game:


China’s courting of Latin America and the Caribbean – signaled anew this week by a visit by its president – is prodding the United States to step up its outreach to the rapidly emerging economies, which are showing greater global clout.

President Xi Jinping’s weeklong trip to Trinidad and Tobago, Costa Rica and Mexico starting Friday comes in the wake of President Barack Obama’s recent trip to Mexico and Costa Rica, and follows by just a day Vice President Joe Biden’s three-nation tour of the region. Xi will meet with Obama at the close of his trip, June 7-8 in California.

China has eclipsed the United States as Brazil and Chile’s largest trading partner, purchasing soybeans, iron ore and oil to fuel its rapidly expanding economy. Latin American exports to China accounted for just $5 billion in 2000; by 2012, they topped $104 billion.