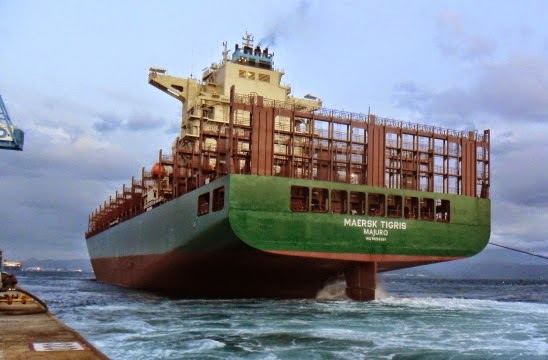 First, as noted in the article below, it was apparently not the Iranian Navy involved, but rather the IRGC Navy which is a different kettle of fish.

Second, after the humiliation of being forced to turn around supply vessels bound for Iranian allies in Yemen, is any one surprised Iran's more activist elements would be involved in trying to "get back" as soon as possible?

Third, typical asymmetric warfare. The Iranians know that it extremely unlikely, regardless of whatever duties we may owe the Marshall Islands flag state of the merchant ship, that the U.S. is ready to go to shooting war over this sort of action. So, a publicity coup for them at little risk.

The Maersk Tigris ship -- originally heading to Jebel Ali in the United Arab Emirates, is now being escorted by the Iranian Navy into waters near Bandar Abbas, home of Iran’s largest Navy base.

The USS Farragut, a guided missile destroyer, is making “best speed” en route to the area and has dispatched a helicopter to get a closer look, the official said.

Col. Steve Warren, a Pentagon spokesman, said the cargo ship's master had initially refused an Iranian order to move further into Iranian waters, but after the warning shots were fired the Maersk Tigris complied.

The cargo ship, which had more than 30 people aboard, was directed to waters near Larak Island, he said.


The ship is a trade vessel and has been seized by the Iranian naval forces at the request of Iran's Ports and Maritime Organization," the source told FNA on Tuesday.

"The ship was seized after a relevant court order was issued for its confiscation," he added, indicating that the ship owner had some long-standing overdue payments that it had to settle with IPMO.

The source said the ship is a "Marshall Islands-flagged, but is owned by the US", adding that the crew are from different nationalities, including Europeans.

However, the headline is pretty clear about the point they are trying to make: