What Happens When the Bill of Rights Gets Trampled

A stunning article from David French at National Review, "Wisconsin’s Shame: I Thought It Was a Home Invasion":


Yet no one in this family was a “perp.” Instead, like Cindy, they were American citizens guilty of nothing more than exercising their First Amendment rights to support Act 10 and other conservative causes in Wisconsin. Sitting there shocked and terrified, this citizen — who is still too intimidated to speak on the record — kept thinking, “Is this America?” 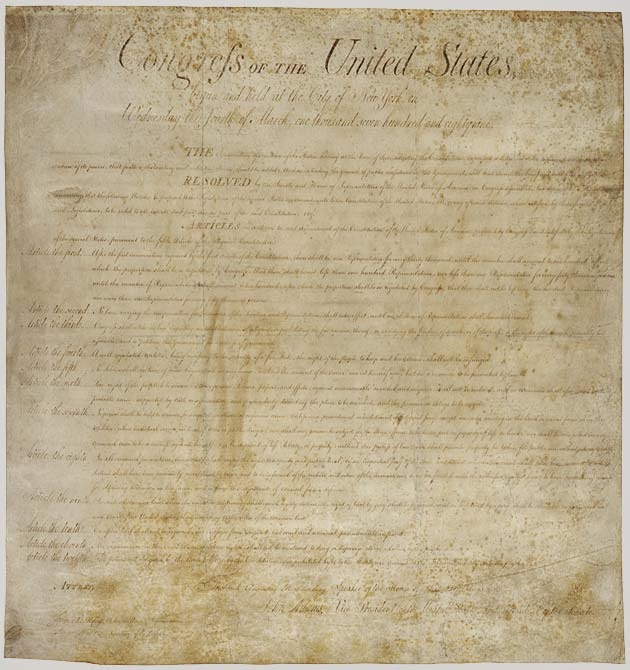 Further, as noted in the article, the "chilling effect" on others by the acts described reach far beyond those actually assaulted by law enforcement agencies.

What that old Buffalo Springfield song (written about a different set of circumstances, but still valid):


There's something happening here
What it is ain't exactly clear
There's a man with a gun over there
Telling me I got to beware
***
t's s time we stop, hey, what's that sound
Everybody look what's going down

Paranoia strikes deep
Into your life it will creep
It starts when you're always afraid
You step out of line, the man come and take you away

Why isn't this song being sung on college campuses today? Go back to that first verse.

Those first ten amendments to our Constitution are important.


. . .  I think Madison right to say that the proper response is not criminalization but argumentation. In a remarkable foreshadowing of John Stuart Mill’s 1859 classic, On Liberty, Madison wrote in 1800 that it is to free speech and a free press, despite all their abuses, that “the world is indebted for all the triumphs which have been gained by reason and humanity, over error and oppression.” Only out of freewheeling discussion, the unbridled clash of opinion and assertion—including false, disagreeable, and unpopular opinions, Madison believed no less than Mill—can truth ultimately emerge. So it is troubling to see that the camel of repression has gotten his nose under the Constitutional tent by a law allowing the prosecution of bosses for tolerating speech by some employees that allegedly creates a “hostile environment” for others. The Court ought to squelch such an affront to the First Amendment. And it is equally troubling that state and federal laws have created such a thing as a “hate crime.” All that should matter to the law is whether the perpetrator of a crime acted with criminal intent, not whether that intent rested on an outlandish opinion.
***
Equally wrong are campaign-finance laws, which, happily, the Supreme Court’s Citizens United decision has begun to undo. In the American political system, based on man’s natural right to life, liberty, and property, money should talk. The core of Madison’s worry about the “tyranny of the majority” in Federalist 10 was that the unpropertied many might vote themselves the property of the rich few—whether by disproportionate taxation, abolition of debts, inflation to erode savings and investments, “an equal division of property, or . . . any other improper or wicked project”—which the Founders believed would be no less a tyranny than an absolute monarch’s expropriation of property. Madison argued in Federalist 10 that the clash of many competing interests in such a big republic as America would prevent such democratic tyranny from occurring; but he proved wrong. . .