Saturday Is Heinlein Quote Day: #52 and final in the series 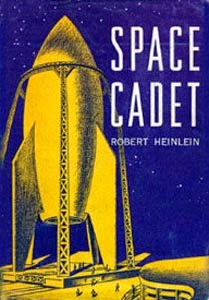 However, from the first time I checked out Space Cadet from the Anderson Air Force Base library on Guam when I was in 4th grade (I think I checked it out 10 or 12 more times after that), to reading the Red Planet (over and over) to my first encounters with Glory Road (teenage boy dream fodder that) to the many, many readings I have undertaken of Starship Troopers and The Moon is a Harsh Mistress, I was/have been a Heinlein junkie.

I'm sure there are hundreds of quotes available about the optimism of science fiction - that it assumes there will be a future. But no one ever expressed as well as Heinlein did the role science fiction plays or should play in helping us ponder that future.