Big Oil Losses: Okay, Where are the Congress Critters Standing in Front of the Cameras on this?

This Week in Petroleum: 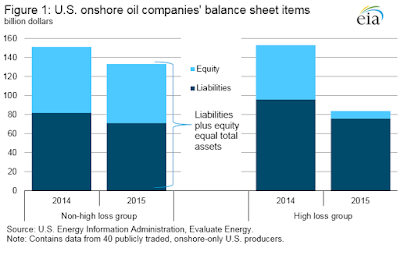 Analysis of the annual reports of 40 publicly traded onshore-only U.S. oil producers reveals combined losses of $67 billion in 2015, driven by significant reductions in sales revenue and write-downs of assets following the decline in crude oil prices over the last 18 months. However, there are significant differences across these companies. Eighteen of these companies, referred to here as the high loss group (HLG), reported 2015 losses in excess of 100% of their equity. The HLG companies were more vulnerable to losses in an environment of falling oil prices than companies outside the group because they had more debt and proved reserves with a smaller economic margin between production cost and wellhead value. These same factors may limit the borrowing ability of the HLG companies, which could constrain their drilling and completion activities and thereby limit their production activities under current market conditions.