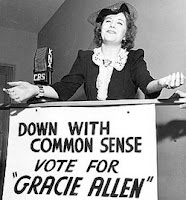 From the more or less innocent days of 1940, when some candidates were more fun than others, here are a couple of hours of comedy genius which I think I have in the right order:


During the election year of 1940, Gracie represented the fictitious Surprise Party and advocated nonsense as part of her platform. The "campaign" was successful enough for Gracie to actually receive write-in votes on election day.

"Advocating nonsense" as part of a political party platform?