Alan Ladd produced this series and hired John Brown to as 'Broadway' who provides key scene-setting narration. He does a very fine job of it, too.

Well, you might ask, "Who was Damon Runyon?" As set out here: 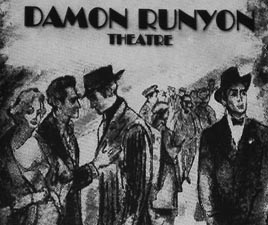 Alfred Damon Runyon (October 4, 1880 – December 10, 1946) was an American newspaperman and author.
He was best known for his short stories celebrating the world of Broadway in New York City that grew out of the Prohibition era. To New Yorkers of his generation, a "Damon Runyon character" evoked a distinctive social type from the Brooklyn or Midtown demi-monde. The adjective "Runyonesque" refers to this type of character as well as to the type of situations and dialog that Runyon depicted. He spun humorous and sentimental tales of gamblers, hustlers, actors, and gangsters, few of whom go by "square" names, preferring instead colorful monikers such as "Nathan Detroit", "Benny Southstreet", "Big Jule", "Harry the Horse", "Good Time Charley", "Dave the Dude", or "The Seldom Seen Kid." His distinctive vernacular style is known as "Runyonese": a mixture of formal speech and colorful slang, almost always in present tense, and always devoid of contractions. He is credited with coining the phrase "Hooray Henry", a term now used in British English to describe an upper-class, loud-mouthed, arrogant twit.
Runyon's fictional world is also known to the general public through the musical Guys and Dolls based on two of his stories, "The Idyll of Miss Sarah Brown" and "Blood Pressure". The musical additionally borrows characters and story elements from a few other Runyon stories, most notably "Pick The Winner." The film Little Miss Marker (and its two remakes, Sorrowful Jones and the 1980 Little Miss Marker) grew from his short story of the same name.