Hot off the steaming presses of the Iraninan state-controlled media site Farsnews comes this howler of a story: 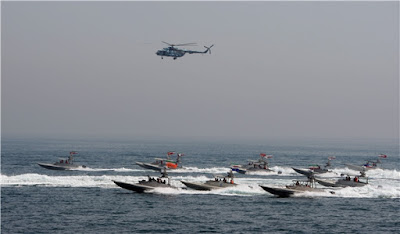 of the Islamic Revolution Guards Corps in the same waters, a senior commander said, adding that the IRGC enjoys full intelligence supremacy and might in the region.
"The IRGC's might and power has grown to the extent that the Americans are terrified when they come across our vessels and this powerful presence exists in the sea, sky, space and land," Commander of the IRGC Navy's Third Zone Brigadier General Mansour Ravankar told FNA on Wednesday.

Noting that the IRGC Navy uses all its defensive capacities, vessels and quick-reaction forces to defend the country, he underlined the IRGC's full intelligence superiority in the region.

"The IRGC Navy is present in the Persian Gulf and the Strait of Hormuz region with full power," General Ravankar said.

"100 IRGC vessels are present in the Persian Gulf round the clock everyday and the Americans see our vessels everywhere they look," Fadavi said, addressing a gathering in the Central province of Isfahan.

Not sure "terrified" is exactly the right word, but so it goes.

Meanwhile, there is the obligatory report of the Iranian Navy chasing pirates (which no other country is reporting seeing) from attacks on Iranian shipping:


Iranian Navy Commander Rear Admiral Habibollah Sayyari announced that the country's 40th flotilla of warships has repelled pirates' attack on an Iranian ship in free waters after fierce clashes.
"On Saturday, 7 pirate boats attacked an Iranian ship but they received the crushing response of the 40th fleet of warships," Sayyari said on Monday.

The Iranian Navy's 40th fleet of warships left Bandar Abbas port, in Southern Hormuzgan province, for the international waters on April 2 to protect the country's cargo ships and oil tankers against pirate attacks.

The Navy's 40th fleet, comprising Tonb logistic warship and Alborz destroyer, is tasked with conducting anti-piracy patrols in the high seas and the Gulf of Aden.

Yawn. The names change, the baloney does not.

By the way, Alborz recently celebrated its 45th anniversary since its 1971 commissioning. Congrats, old timer!

As for Tonb, here's a video of it joining the Iranian fleet in 2015: