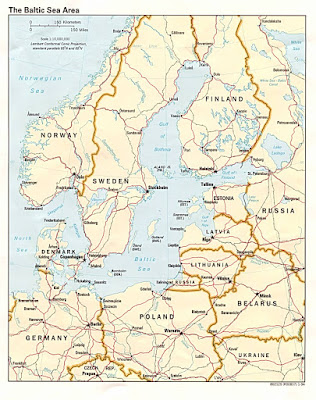 Under the United Nations Convention on the the Law of the Sea, "international waters" means waters not part of the "territorial sea" of a nation and there is a 12-mile limit:


Every State has the right to establish the breadth of its territorial sea up to a limit not exceeding 12 nautical miles . . .

"High Seas" (what most of think of as "International Waters") are defined in Art.86 of UNCLOS:


all parts of the sea that are not included in the exclusive economic zone, in the territorial sea or in the internal waters of a State

As we have seen, China has taken a a more aggressive position on "territorial waters" apparently to include "historic waters we have once sailed in" or "historic fishing areas." See here, here, and here for examples.

It occurs to me that Russia, seeing how this unlawful but also virtually unanswerable (short of war) brute force approach has succeeded for China, is now playing the same game in both the Baltic and Black Sea. See here and here.

Take a look at this nice bit of political jujitsu which blames the U.S. and its allies of the "crime" of coming too close to Russian waters (not in them, but close) and provoking the latest incident of Russian planes low flying over a U.S. ship, as set out in


Russia sought to turn the tables on the United States on Wednesday, accusing the U.S. Navy of maneuvering aggressively near the Russian border in the Baltics and promising it would use “all necessary measures” to address future incidents.

According to the Russians, the incident in question occurred Apr. 11, when a U.S. destroyer drew near Kalingrad in the Russian territorial enclave between Lithuania and Poland.

“This is about attempts to exercise military pressure on Russia,” Russian envoy to NATO Alexander Grushko told reporters after a NATO-Russia council meeting on Wednesday, according to Reuters. “We will take all necessary measures, precautions, to compensate for these attempts to use military force.”

On the nearby map, I have circled the Russian territory of Kahlingrad Oblast, which is, as you see, 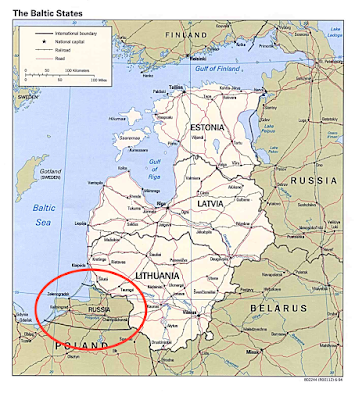 surrounded by independent countries, i.e. isolated from Russia, a situation I am sure Putin would like to change. But there are those pesky NATO countries in the way, Lithuania and Poland.

In any event, we are seeing the old bully ploy of "it's your fault that I will attack you." Picture Putin as "Biff," if you will.

Bullies will be bullies, of course, so long as they can get away with it.

Worse, though, is that the concept of some sort of international law governing where Russian (or Chinese, for that matter) right end and begin is very obviously broken.

Putin has pushed this with his "little green men" in Ukraine and with his prior incursion into Georgia. The Chinese have pushed it by just grabbing parts of the South China Sea and daring anyone to push them off their artificial islands.

If you think either one of these thug nations won't hesitate to play the 12-mile limit when it suits them as a means of expanding their territory, you are most naive. And just wait until we get to the Arctic.
Posted by Mark Tempest at 4/21/2016 07:36:00 PM