From the Department of Cheaper War Fighting: "A Ship that Still Isn't a Frigate" - byThink Defence

A while ago, Think Defence took on the task of thinking through what sorts of uses could be made of ships built for trade by an armed force that wanted to save its multi-billion dollar real warship hulls for doing what they were meant to do - patrolling the sea against threats from submarines and things like that.

Think Defence expanded on an idea I proposed in The Department of Cheaper Pirate FIghting with an interesting post titled A Ship that Still Isn't a Frigate: 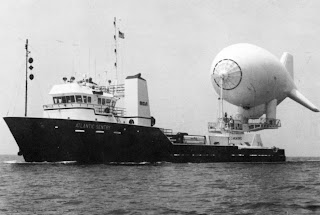 that is not a Frigate, so called because it was a few thoughts on how the Royal Navy could create a class of vessels that could operate in the area between the RFA logistics support vessel and the frigate or destroyer, specifically on a range of non-war-like tasks.

Taking inspiration from Mark Tempest I expanded the concept from re-purposing surplus offshore supply vessels and creating a larger, more flexible ship, utilising an offshore construction vessel as a base.

Since then, and before, I have written about the general concept a few times so this is a continuation and consolidation of those various blog posts and longer series.

The reason I called it ‘not a frigate’ because it was not intended to be a frigate on the cheap, or a surrogate frigate, and to emphasise the point so that people would not get carried away by adding medium calibre guns and cruise missiles.

The reason this article is notionally called ‘still not a frigate’ is because that still stands.

If one wants a Frigate (light or global) ask those nice chaps at BAE or BMT to design and build one for you.

So why bother, the simple point, the whole raison d’être for this, is one of cost, trying to squeeze the maximum utility from the smallest pot of cash. A class of ships that fulfils a plethora of roles that are less than high intensity combat, and might use some notional future budget for an Argus and Diligence replacement, and perhaps with a nod to future mine countermeasures and survey budgets.

Yes! Despite the crazy English spelling, TD has it exactly right. If you need more ships, figure out which missions are best performed by "not a frigates" and get going on building a force of such vessels to take on things like . . .piracy patrols, or the the list TD suggests:

The U.S. Navy already has a number of normally unarmed vessels it uses for some of these purposes. You can see the list at the Military Sealift Command site.

Now, what, as I have suggested before we alter the equation by adding some armament? By placing hard-charging young officers out there in command of the modern equivalent of armed schooners? Let them get their feet wet in command.

Why? Let me refer you to an article in the March 2017 U.S. Naval Institute Proceedings, "Too Many SWOs per Ship which points out that too many of our 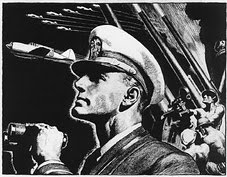 surface officer youngsters are going to waste because they have too few opportunities to do the one fun thing about being a surface warfare officer - driving ships:


Inequalities in experience are exacerbated by the sheer numbers of division officers assigned to surface combatants. An afloat SWO training program seeks to enhance the baseline knowledge learned during the Basic Division Officer Course and help ensigns to achieve their SWO qualification. Nothing is more important to the quality of those qualifications than watch-standing experience, particularly during special evolutions. Given a finite number of special evolutions, large wardrooms result in fewer watchbill assignments per officer. Watchbills either become bloated with under-instruction watch standers—often to the detriment of the watch team’s overall cohesion—or junior officers simply are not given more than a handful of opportunities to directly participate in special evolutions.

Solution? More, cheaper ships doing real missions that can fully engage the hearts and minds of our future admirals. On smaller ships, experience comes at you fast.