You imagine that some genius thought it was a wonderful idea to put the "man with a thousand voices" into a radio situation comedy in which he played "fix-it" shop owner.* Which it was for about 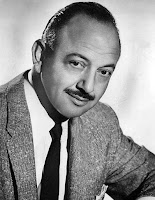 
*Back in the day, instead of throwing out things that broke, we'd take them to a guy whose skill was fixing such things in his "fix-it shop" almost always for a lot less than buying something new.
Posted by Mark Tempest at 3/18/2017 07:00:00 AM