Saturday Is Old Radio Day: The Life of Riley "The Bread Shortage (1946)"


The Life of Riley, with William Bendix in the title role, is a popular 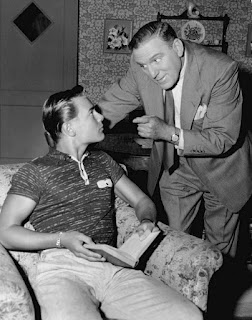 American radio situation comedy series of the 1940s that was adapted into a 1949 feature film, a long-running 1950s television series (originally with Jackie Gleason as Riley for one truncated season, then with Bendix for six seasons), and a 1958 comic book.
***
The reworked script cast Bendix as blundering Chester A. Riley, a wing riveter at the fictional Cunningham Aircraft plant in California. His frequent exclamation of indignation—"What a revoltin' development this is!"—became one of the most famous catchphrases of the 1940s. It was later reused by Benjamin J. Grimm of the Fantastic Four. The radio series also benefited from the immense popularity of a supporting character, Digby "Digger" O'Dell (John Brown), "the friendly undertaker." Brecher told Brown, "I want a very sepulchral voice, quavering, morbid, and he got it right away."


Here's a show with Mr. Bendix in the lead: