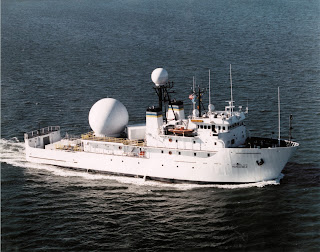 A commander of the Islamic Revolution Guards Corps Navy blasted the recent change of course by a US warship towards the IRGC vessels in the Persian Gulf, and warned of the dire repercussions of such "unprofessional" actions by Americans. (what follows in blue is a quote from Reuters here (emphasis added)):
"A US warship of the US-British fleet, which was sailing through the traffic zone of the Strait of Hormuz, derailed from the international way and changed its course towards the IRGC Navy vessels present in the region at 10:20 to 11:00 of March 4 morning and it approached our vessels from a 550m distance in an unprofessional move with simultaneous warnings," Commander of the warship of the Zolfaqar 112 combat brigade of the IRGC Navy's first zone Admiral Mehdi Hashemi said on Wednesday.

Noting that deployment of the US and British vessels in the Persian Gulf and the Strait of Hormuz has endangered security of the strategic region which is deemed as the world's energy lifeline, he said, "Their unprofessional moves have provoked tension and insecurity and can have irreparable consequences."

His remarks came after a US official claimed on Monday that multiple fast-attack vessels from the Iranian Islamic Revolution Guard Corps came close to a US Navy ship in the Strait of Hormuz on Saturday, forcing it to change direction.

"The official, speaking on the condition of anonymity, said the IRGCN boats came within 600 yards of the USNS Invincible, a tracking ship, and stopped. The Invincible was being accompanied by three ships from British Royal Navy and forced the formation to change course," Reuters claimed in its report.

Yep, nothing spells threat to IRGC small boats like an unarmed missile tracking ship that can speed along at 11 knots.


A U.S. Navy surveillance ship was harassed by an Iranian fast attack craft while entering the Persian Gulf on Saturday, a defense official confirmed to USNI News on Monday.

USNS Invincible (T-AGM-24) was transiting the Strait of Hormuz in the early morning on March 4 with three other coalition ships when the ships were approached by several Iranian Revolutionary Guard Corps Navy fast attack craft, the official told USNI News.

One of the IRGCN craft maneuvered 600 yards in front of the 2,300-ton Invincible and “went dead in the water,” the official said.

The IRGCN boat became a hazard to navigation and forced the ship to steer around the boat to avoid a collision. Exacerbating the already dangerous maneuver, a commercial ship was at the same moment attempting to overtake the formation in the narrow entrance to the Persian Gulf.

Given the hazard, the Navy categorized the interaction as “unsafe and unprofessional,” the official said.