Somali Pirates Go Hunting, Grab a Dhow to Use for Longer Range Operations

Let's suppose you are at Somali pirate "High Command" and for 5 years you've been doing some "lessons learned" review and trying to decide how to make a comeback. You know that NATO forces will tire of patrolling the long pirate-less waters of the Arabian Sea and will save their countries money by going home. You know that smaller shipping companies, always watching their bottom line, will cease paying for expensive armed guards as soon as they make the decision that the cost/benefit ratio swings in favor of saving money over the cost of ship security.

With some time on your hands you contemplate how to repeat the old "happy times" of taking ships at sea using low cost, entirely expendable labor. You plan, you plot, you wait. NATO forces do leave. The EU group's mission is not "high seas piracy" but convoying food to your failed state homeland, so you will leave the food ships alone. You wait. You put out some small groups into the waters and watch for reactions. They get reported, but no one chases them down, so you grow bolder.

You find a cheesy little tanker (love that low freeboard) and you dispatch a team to take her. Your spokesman revives the old "protecting our fishing grounds" routine, which can be applied to any vessel seizure, regardless of whether or not the seized vessel has any connection to fishing or not, because it sounds so ... justifiable? It helps that there really are bad guys out there illegally fishing in what would be Somali waters if Somalia was a real nation instead of a geographic area full of warring tribes and power seeking goobers.

In any event, you've proven that piracy can done again. You return the test case vessel without seeking ransom. Now you move on to phase 2 - expanding the potential range of your workers - by hijacking a "Mother Ship": 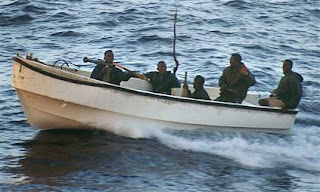 Operations (UKMTO) warned that pirates had hijacked a dhow in the vicinity of Eyl, a city in northern Somalia that was once a hub for maritime piracy. Local authorities suggest that they may intend to use the small vessel for hijacking a merchant ship further offshore.

"Some crew have been put ashore and the [dhow] is now proceeding to sea; course, speed and destination unknown. Vessels are advised to exercise extreme caution," UKMTO warned.

Residents of Eyl told Reuters that local pirates were seeking a target. "We understand that pirates hijacked the fishing vessel to hijack a big ship off the ocean," said Abdirahman Mohamud, head of maritime police forces in Puntland. He added that the pirates had kept the dhow's captain, cook and engineer on board.

If little players like the tanker have given up on armed security teams just off the Somali coast, you think, then there may be some ripe picking of bigger ships out there - where the owners figure the risk of piracy is now low enough to start cutting corners on ship protection. And there's not NATO lurking about to send planes and helicopters and nasty little boats full of armed boarding teams.

The waiting game seems to be over.