Capturing real live pirates and how they whine 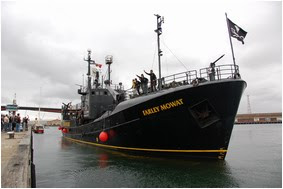 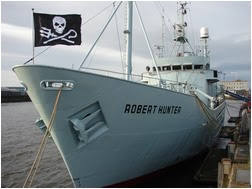 Well done Op-Ed on the hypocrisy of the anti-whaling "Sea Shepherds found here. You may remember the Sea Shepherds as a couple of ships and their crew who have taken to ramming whaling ships in order to protect whales, thus placing human life somewhere below their list of important things than whales. The news occasionally runs a piece on one of the more flamboyant Shepherds, who has called himself a "pirate" and has been known to fly the "Jolly Roger" on his ship. See here and here.
So now, the OP-Ed writer calls them out:


Usually the first to tout endless negotiations and appeasement when matters of our own or our allies'national defence are on the line, the Red-Greens are calling upon the New Zealand government to immediately send armed warships to Antarctica, apparently to intimidate the crew of a Japanese whaling vessel who were acting in self-defence when they detained two militant whaling protesters whom even the radical Greenpeace have explicitly distanced themselves from.

The group in question are known as Sea Shepherd. They were not there protesting with banners or placing themselves between the whaling vessel and the whales. No, Sea Shepherd were there initiating force, and endangering human life and limb. The two detained men forcibly boarded the Japanese whaling vessel, the Yushin Maru, after attempting to entangle the propellers of the vessel using ropes, and throwing bottles of acid onto the decks. Frankly they were lucky not to be shot or harpooned on sight. A captain of a vessel, especially in a notoriously dangerous environment, would have every moral right to use lethal force to ensure the safety of himself, his crew and his vessel. The captain of the Yushin Maru showed compassion and restraint in merely detaining the men.

Greens spokesthing Metiria Turei says, "The latest events in Antarctica are unprecedented and may well escalate to a situation where lives are put in direct danger." What the breathlessly arrogant woman is failing to recognise is that lives were in danger! The lives of the crew of the Japanese vessel. But now, with the detention of the two eco-terrorists from Sea Shepherd, those lives are safe (provided the terrorists are kept under close guard). At any rate, what pray tell does she think sending an armed New Zealand warship to "observe" would do to de-escalate the situation? Bloodthirsty hypocrisy of the highest degree.


Make no mistake, these Shepherd fools are pirates:

There is little sympathy from an Australian maritime law expert for two activists being held on board a Japanese whaling vessel in the Southern Ocean.

The Australian and Briton from the Sea Shepherd vessel Steve Irwin illegally boarded the Yushin Marun No2 last night.

Professor Sam Bateman says the men committed an act of piracy and the Japanese have every right to detain them.

Of course, the whining of the Sea Shepherds has begun, including some incredible quotes from "Captain" Watson:

Japan's whaling fleet in the Antarctic halted its operations Wednesday and scrambled to arrange the turnover of two activists who boarded one of its harpoon ships after a tense, high-seas chase, accusing the Sea Shepherd conservation group of piracy.

The captain of the activists' ship, meanwhile, told The Associated Press the two were "hostages" and vowed to continue to harass the fleet.

"We will only accept an unconditional release," Sea Shepherd founder Paul Watson told the AP by satellite phone from the anti-whaling ship Steve Irwin. He said he wanted action immediately.

"We're going to chase them until they stop their hunt," Watson said. "As long as we're chasing them, they're not killing any whales."

The Japanese Fisheries Agency said it told the anti-whaling group to pick up the two activists, who boarded a harpoon ship on Tuesday to deliver a protest letter. The agency said its only demand was that the Sea Shepherd promise not to mount any attacks during the rendezvous.

Watson, however, said Japan was also demanding the group end its harassment of the whaling fleet as a condition of securing the pair's freedom.
***
But Watson said Japan was demanding Sea Shepherd stop harassing, filming or photographing the whalers, and that the transfer of the pair be conducted by small boat, 10 nautical miles from the Yushin Maru.

"I find it very strange that people who are holding hostages are calling us the pirates," Watson said.

"When you hold hostages and make demands, that is the definition of a terrorist organisation, and that is the way they are acting," Captain Watson said.

"We are not going to cease and desist from interfering in their illegal whaling activities as a condition."

I reckon Watson does know "terrorism" when he practices -er- sees it...

Watson is lucky his men aren't dangling from a yardarm...