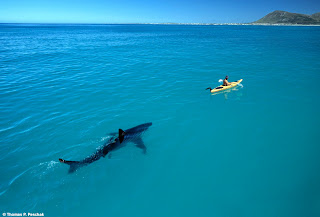 Put this is the "things I don't want have happen to me" category- It's behind you: Great White stalks ocean canoeist:

Alone in his tiny plastic sea kayak, marine biologist Trey Snow had hoped to stealthily track a great white shark. But he had the shock of his life when he spotted a giant fin and realised it was he who was being stalked - by surely one of the most feared killers in the world.