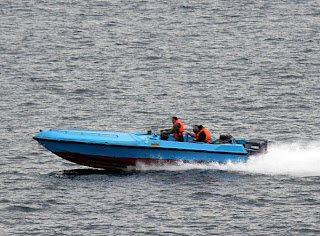 Following a routine transit through the Strait of Hormuz Jan. 6, three U.S. Navy ships operating in international waters in the Persian Gulf were approached by five Iranian small boats that demonstrated irresponsible confrontational behavior near the U.S. ships.

U.S. Navy ships USS Port Royal (CG 73), USS Hopper (DDG 70) and USS Ingraham (FFG 61) were steaming in formation at approximately 8 a.m. as they finished a routine Strait of Hormuz transit when five boats, suspected to be from the Islamic Republic of Iran Revolutionary Guard Navy (IRGCN), maneuvered aggressively in close proximity of the Hopper.

Coalition vessels, including U.S. Navy ships, routinely operate in the vicinity of both Islamic Republic of Iran Navy and IRGCN vessels and aircraft. These interactions are always correct on the U.S. part and reflect a commitment to accepted tenets of international law and common practice.

UPDATE: As T.F. Stern notes in the comments, the Iranians are asserting that the video and audio are fake:

Iran has denounced video and audio recording released by the United States of the two nations' confrontation in the Strait of Hormuz as "fabricated," according to statements carried by state-run television station.

"The footage released by the U.S. Navy was compiled using file pictures and the audio has been fabricated," English-language channel Press TV reported an official in the Revolutionary Guards as saying Wednesday.

The Pentagon Tuesday released a four-minute, 20-second video of Sunday's incident, including video showing small Iranian boats swarming around U.S. warships in the Persian Gulf. In the audio recording, a man speaking in heavily accented English threatened, "I am coming to you. ...You will explode after ... minutes."