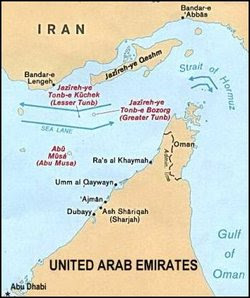 Well, I get a little busy at the office and Iran decides to play "Chokepoint Chicken" in the Strait of Hormuz:

The three U.S. warships _ cruiser USS Port Royal, destroyer USS Hopper and frigate USS Ingraham _ were headed into the Persian Gulf through the Straits of Hormuz on what the U.S. Navy called a routine passage inside international waters when they were approached by five small high-speed vessels believed to be from Iran's Revolutionary Guard Corps Navy.

The Iranians "maneuvered aggressively" in the direction of the U.S. ships, said Vice Adm. Kevin Cosgriff, the commander of U.S. 5th Fleet, which patrols the Gulf and is based at nearby Bahrain. The U.S. ship commanders took a series of steps toward firing on the boats, which approached to within 500 yards, but the Iranians suddenly fled back toward their shore, Cosgriff said.

Cosgriff was not precise about the U.S. ships' location but indicated they were about three miles outside Iran's territorial waters, which extend 12 miles from its shores, headed in a westerly direction after having passed the narrowest point in the straits.

"Subsequently, two of these boats were observed dropping objects in the water, generally in the path of the final ship in the formation, the USS Ingraham," he added. "These objects were white, box-like objects that floated. And, obviously, the ship passed by them safely."

The boxes were not retrieved, so U.S. officials do not know whether they posed an actual threat. Cosgriff the U.S. ship commanders were moving through a standard series of actions _ including radio calls to the Iranians that went unheeded _ but did not reach the point of firing warning shots.

And exactly how many suspicious packages dropped in the water does it take to slow down traffic in the Strait?

The Strait of Hormuz is by far the world’s most important chokepoint with an oil flow of 16.5-17 million barrels per day.

More at Salamander here, at Information Dissemination and the links in both of them. Make sure you understand that CDR Salamander is exactly right when he says the Iranians bumped this event right up to "firing time." A small, armed, apparently attacking boat 200 yards out is about ready to become a former boat.

UPDATE: Some interesting analysis for you to evaluate here:

...The Iranian port of Bandar Abbas is poised at the head of the Straits of Hormuz and is the military nerve centre from which the Iranian defense strategy in the Persian Gulf would be coordinated in an emergency.
***
Bandar Abbas's coastline already bristles with military surface radars and anti-aircraft batteries as well as sprawling navy camps. Surface-to-surface missiles capable of targeting shipping moving through the Straits of Hormuz are deployed in fortified bunkers protecting them against attack from US Navy airpower in the Gulf. The effectiveness of these coast-to-ship rockets was dramatically demonstrated by Hezbollah last year when it hit a high-tech Israeli Sa'ar missile corvette Hanit, off the Lebanese coast at the start of the five-week conflict.
***
Chahbahar naval base, the closest and best access point of Iran to the Indian Ocean is being modified to serve the kilo-class submarines Iran bought from Russia in the 1990s. In 2001 the Iranian armed forces staged the Unity-80 naval exercises from here, as part of an effort to make the Chahbahar naval base and its submarines operational. The naval base at Jask is located in Hormuzgan Province, on a commanding position at the entrance to the Hormuz strait.
***
Currently, intelligence reports have identified Jask as the center of Chinese made long-range missiles.

US Military analysts warn that Iran's missile armaments pose the greatest concern for American forces in the Gulf, especially for the US Navy. Geographically, the Iranian coast facing the Persian Gulf is a looming wall of mountains that look down upon any naval forces arrayed in those waters. But the greatest threat comes from the Iranian occupied islands located off the Persian Gulf coast which are strategically sited, virtually controlling the shipping lanes of the Strait of Hormuz.

US intelligence has located advanced anti-ship missiles are deployed at Abu Musa and two other islands, Qeshm and Sirri. Among the most dangerous, is the Russian-made 3M-82 Moskit anti-ship cruise missiles (NATO designation: SS-N-22 "Sunburn". ... The Asian Times reported recently, that Abu Musa Island, along with its mountainous areas, is teeming with Supersonic cruise missiles such as Yakonts, Moskits, Granits, and Brahmos, controlled by Iranian IRGC crews.

In late January of 2000, US satellites monitored an Iranian Marine Brigade, with supporting artillery and SAMs, reinforcing Qeshm Island where many mobile anti-ship missiles were already located. Revolutionary Guard units also moved to reinforce the islands of Jazirezye Larak, Tunb al Kubra, and Abu Musa, as well as miscellaneous oil platforms. These surprising moves remained unexplained at the time, but raised the level of alert in nearby US military installations in Saudi Arabia and Gulf nations. At the same time the USS John C. Stennis strike group deployed to its station in the Gulf in support of the UK/US enforced no-fly zone in Sadam's Iraq.

An unconfirmed report quoting unidentified Pentagon sources has recently revealed a top secret Iranian contingency plan, allegedly leaked by a former Iranian intelligence defector. The document detailed a strike plan which schematically laid out Iran's military and strategic assets from the Straits of Hormuz. Coordinated by an operational headquarters, forces would integrate Revolutionary Guards missile units, strike aircraft, surface and underwater vessels, anti-shipping missiles, mine cruise missiles, all hitting targets in the Sea of Oman and northern Indian Ocean. Senior Iranian commanders, like Rear-Admiral Ali Fadavi, of the Revolutionary Guard have expressed similar claims, although without going into operational details. While those reports should be regarded with caution, they nevertheless render an insight into the ongoing trends in Tehran's naval strategy in the Gulf.