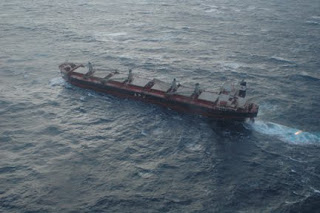 For four days, the India flagged bulk carrier APJ Suryavir has been drifting in the the North Pacific fighting a fierce storm and being monitored by the U.S. Coast Guard. THe crew had contemplated abandoning ship. Now, as set out here, the ship has regained power and is heading for the U.S. coast:

The vessel’s crew reported Monday it fixed the engines and was able to continue its voyage to Portland, Ore., after nearly four days without sufficient engine power.