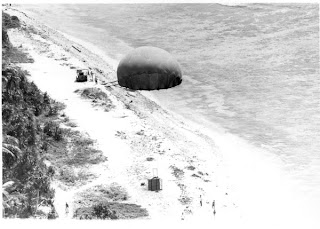 Guam - Today kicked off Operation Christmas Drop, an annual project where the men and women of the United States Air Force fly over the outer islands of Micronesia and play Santa from the sky. "We'll have an opportunity to bring much needed supplies and hope to people in the Micronesian islands," said Colonel Mark Hicks.

It's a long-lasting tradition ongoing for the last fifty-eight years. During Tuesday's push ceremony at Andersen Air Force Base, Brigadier General Phil Rhulman announced that the Air Force plans to make fifty-one drops to over fifty islands, bringing with them over 25,000 pounds of food and supplies. Said, Rhulman "In the spirit of Christmas is obviously behind what we do.

The first flight of Operation Christmas Drop will head to four islands in northern Chuuk. Murilo, Ruo, Fananu and Nomwin are mere dots in the Pacific, Bruce Best said. Best is a University of Guam radio station manager who sends news to the islands every morning.

These four islands lie so low against the ocean that rough weather can easily push waves over the surface, killing the taro crops and salting the soil, Best said. Bananas and breadfruit trees grow on the islands, but there isn't enough soil to support much fruit. 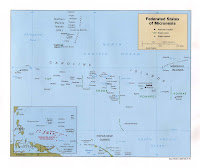 "They have been calling in on this radio requesting food (for six months,)" Best said. "... They are so hungry so the timing of the Christmas Drop is good."

Over the next four days the mission will drop 10 tons of gifts to 51 islands, starting with these four. Some of the islands have 1,000 residents and some have only a few hundred.

Murilo, Ruo, Fananu and Nomwin have between 300 and 700 residents each, Best said.

Last year's Christmas Drop reached about 68 islands and was the largest delivery in the event's 58-year history.