NPR notes A Record Year For Pirate Attacks with a silly opening line:

Despite a year of beefed-up patrols by the world's strongest navies, piracy continues to be alive and thriving around the Horn of Africa and far out in the Indian Ocean. Analysts say the pirates appear to be better funded, organized and equipped.

Until every ship is either armed or escorted and captured pirates are punished instead of being released nothing at sea will slow the pirates down much. And the "world's strongest navies" are particularly ill-suited to engage pirates in small boats lurking in wait for ships to pass by. If it wasn't for the helicopters they carry, the pirates would have captured even more ships.

More patrol vessels are needed. Broken record that I am,

I have proposed a way to get some more patrol ships on the cheap. See Department of Cheaper Pirate Fighting. 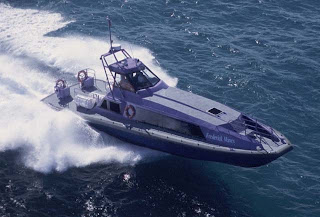 As Secretary of Defense Gate said earlier this year: "... [Y]ou don’t necessarily need a billion-dollar ship to chase down a bunch of teenage pirates. "

You want a few high speed boats (35 kts) on the cheap? Look here. 20 knots? See here. Give me a couple of young officers and a small crew and we can go hunt pirates with a squadron of these things. I am willing to bet that 50 boats could be out there (25 on patrol, 25 being serviced/crew rest) in a couple of months for under $100 million total, including some sort of mother ship. I like an amphib with a well deck and a small fuel tanker with some blivets for fueling the boats. Crew rest? Here's an idea.

If you had another 25 patrol craft and a few helicopters, it might be a good idea to blockade known pirate ports and interdict all boats (especially potential mother ships) for inspection as they leave those locations. If you need help in finding them, these include the locations where the pirates "bank" their captured ships.

And, if you really want to stop piracy from Somalia, you are going to have to engage the pirates on the shore and wipe out their support system. That support system is getting more and more entrenched.