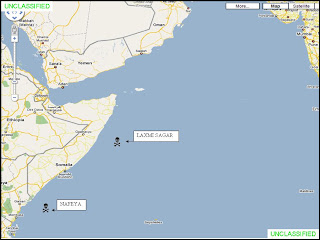 3. (U) Projected Risk of Attack
A. (U) GULF OF ADEN: Over the next 72 hours weather conditions are less conducive for small boat activity in the Gulf of Aden with winds at 5-20 knots and associated wave heights of 2-6 feet (UK Weather Online).
B. (U) INDIAN OCEAN: In the Indian Ocean off the east coast of Somalia, weather conditions are now less conducive to small boat operations. Forecasts indicate wind speeds of 10-20 knots with associated wave heights of 4-8 feet (UK Weather Online).
***
5. (U) Forecast for Week of 23-29 December 2009

(U) Weather conditions continue to worsen in the Indian Ocean off the east coast of Somalia and in the Gulf of Aden as the winter monsoon season sets in. The winter monsoon season is expected to bring weather likely not suitable to small boat operations in the Horn of Africa (HOA) region. However, it is likely that a few groups will still get underway and try to hijack ships. Mariners are warned that though we do expect a decrease in overall pirate activity in the HOA region, the possibility of pirate attack is still great, and mariners should continue to maintain all counter-piracy measures when transiting the area. Somali pirates currently hold fewer vessels for ransom than they have shown the ability to hold. This week, ONI assesses the risk of pirate attacks is moderate in the Indian Ocean with increased risks in the areas noted in red on the map below. Please note pirates south of the equator in the Indian Ocean have demonstrated the ability to operate in the capability range of Medium. Prevailing currents are significant between latitudes 1 degree north and 5 degrees south and tend to flow in an easterly direction with speeds up to 3.5 kts. Therefore, increased risk of attack exists due east of the Somali coast out as far as 1000NM (Past 62E longitude-Greater than 500NM northeast of Port Victoria, Seychelles) between these latitudes. While there has been a decrease in overall activity in the Gulf of Aden, it remains a prime operating area for Somali pirates.
***
A. (U) Summary of the Week
(U) There are two incidents to report in this period. Both incidents occurred last week but came to light this week.

1. (U) Vessels Hijacked
1. Dhow (NAFEYA) hijacked on 16 December 09 at 1700 local time while underway near position 02:45S – 42:37E. Dhow has a crew of 13 Indians on board. Dhow is now underway likely conducting pirate mothership operations.

I have rearranged the order of the report for ease of reading.