Somali Pirates: Too much media hype? 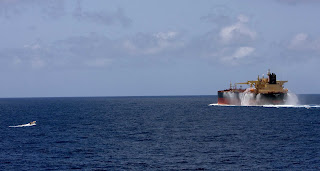 Retired Rear Adm. Terence "Terry" McKnight, the past commander of the Combined Maritime Forces (CMF) and Combined Task Force 151 (CTF-151) for counterpiracy operations, spoke last week at lunch time lecture at the National Naval Museum. The admiral surprised the audience by saying that the piracy problem in the Gulf Aden is "over publicized."

"We are fighting wars on two fronts in Iraq and Afghanistan with hundreds of thousands of troops involved. Yet world attention, particularly media attention, is drawn to Somali piracy in the Gulf Aden, which is a very minor problem in the large scheme of things," he said.

Though more than 30,000 ships transit the area annually only 27 attacks have been successful in 2009. The ships that fall prey to the pirates are warned and counseled by the CMF in how to protect themselves. If they follow some simple procedures they can make themselves less attractive to piracy.

"We have set up a registry for ships that are transiting the Gulf so we will know when they will be in the area. They are also provided a checklist of vulnerabilities that the pirates are looking for. If the ships vulnerability checklist suggests they might be a target, the task force will try to protect them," added McKnight.

The admiral said simple things make ships targets; slow moving (less than 10 knots), no lookouts, and easy access from the water. He also said that Somalia piracy is a seasonal event from late fall to early spring.

"And, it usually happens in the morning in a specific 400 mile stretch of the Gulf," he said.

The former task force commander said after a review of the entire history of attacks the CMF identified the area of exposure and that is where they concentrate their protection. The task force is made up of up-to 25 warships from more than 20 nations.

"Every nation is interested in piracy because of the risk to the free flow of commerce and the risk to crews on the targeted ships."

The admiral said there have been some erroneous reports about the sophistication of the piracy operations.

"It depends on what you call sophisticated. Somali pirates are easy to spot," he said. "If they are barefooted in a skiff with grappling hooks, rope ladders, guns and a GPS, they probably aren't fishermen."

Another rumor associated with piracy is that the ransoms are being used to finance terrorism. McKnight reassured the audience that there was no evidence to support a connection with terrorism.

The retired admiral was asked what the best way to stop the pirates was.

"A functional government in Somalia with a rule of law, a court system, prosecutors and law enforcement," he answered.

He's right in many of the right ways.

On the other hand, the pirates are holding a couple of hundred hostages and nearly a dozen ships... and this is a long-running war of sorts with them - with a couple of dozen warships chasing some ragtag youths in small boats who have enough sophistication to nab 27 ships this year so far.
Posted by Mark Tempest at 12/08/2009 07:30:00 AM