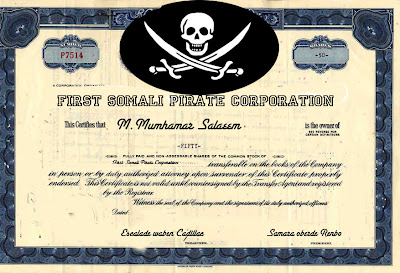 Like some sort of weird take-off from Catch-22's Milo Minderbinder, it appears that now "everyone can own a share" of one of the Somali pirate groups, as set out here.:

As for the pirate stock exchange, it seems like just another natural step for Somali communities that increasingly depend on illegal activities for economic subsistence. Somali pirates put a percentage of their ransom money back into their communities to pay for hospitals and public schools. Reuters quotes a woman who contributed a rocket-propelled grenade to one group of pirates and eagerly anticipates the dividends.

Spokesmen for the pirates assert that the demands of investors have caused them to raise ransom rates.