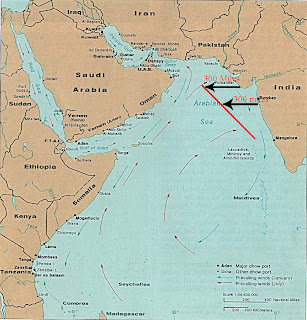 A Shipping Corporation of India vessel with 35 crew members on board was attacked by pirates in the Arabian sea, around 300 miles off the western coast, but it managed to escape, a top company official said today.

The hijack bid took place last night when the vessel 'Maharaj Agrasen' was on its way to Vizag from Kuwait, he said.

"The incident took place on Monday late night when a group of pirates in three speed-boats attacked the vessel with machine guns and rocket-propelled grenades. However, quick thinking by the ship's captain saved the crew members," National Union of Seafarers of India's General Secretary, Abdulgani Y Serang, told PTI here.

The Captain, after making an attempt to ram the ship into a pirate boat, changed the direction of the vessel and sped away, Serang said.

The 300 miles is from the west coast of India. This either shows a new pirate group or a further movement of Somali pirates to the east. [update - assuming this 300 miles off India is accurate] 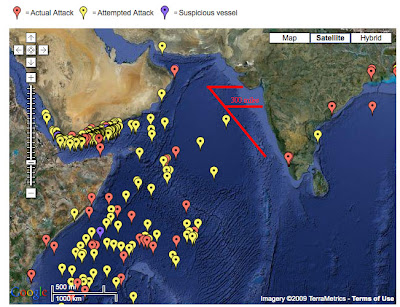 UPDATE3: One possible explanation - the waves. Look at the map below (from Oceanweather, Inc): 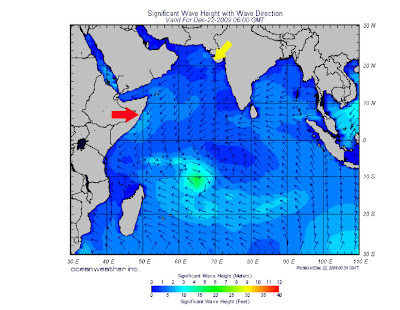 Note that the darker (hence smaller) wave heights are off India (yellow arrow), whereas the waves off Somalia are higher (red arrow). Lower waves make for easier piracy from small boats.

BRITAIN’S foreign secretary has warned the shipping industry that it must rely on its own devices to defend itself against Somali piracy in the Indian Ocean, admitting frankly that navies cannot provide the high level of support currently on offer in the Gulf of Aden.

Why not? Not enough patrol ships, that's why. I have a

modest answer. And here. And even a low cost anti-pirate helicopter carrier here. With a good anti-pirate aircraft, too.

UPDATE5: What do you look for? A Portuguese naval vessel interdicted some potential pirates and the infrared picture looked like this: 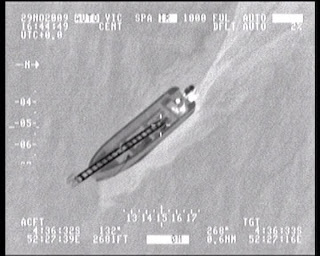 There are such things as "fish ladders," but I am pretty sure that's not one of them in the boat.