Fearless Navy Bloggers Take to the Air: Episode 29 COIN and the USMCs next decade 7/18/2010 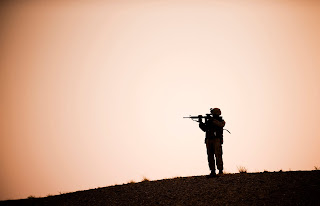 As we move into our second decade of conflict with Islamist terrorism, what have we learned, relearned, or having to unlearn about Counter Insurgency (COIN)? Our guest to discuss this will be Dr. Andrea J. Dew, Co-Director, Center on Irregular Warfare & Armed Groups (CIWAG), Strategy and Policy Department U.S. Naval War College Newport, RI. For the second half of the show, we will look at the moves being made already to gut the USMC force levels at first chance - how do we get the narrative right to fight this coming battle? Returning guest, Mark E. Stanovich, LtCol USMCR will be with us to discuss this along with the latest developments with the Marine Corps.

Listen to internet radio with Midrats on Blog Talk Radio


Lance Cpl. Edgar Jones, a combat engineer with Lima Company, 3rd Battalion, 3rd Marine Regiment, observes the horizon at the start of a nine-hour night patrol in Southern Shorsurak, Helmand province, Afghanistan, as part of Operation New Dawn, June 27, 2010. Operation New Dawn is a joint operation between Marine Corps units and the Afghanistan National Army to disrupt enemy forces, which have been using the sparsely populated region between Marjah and Nawa as a safe haven. (Official Marine Corps photo by Sgt. Mark Fayloga)