Somali Pirates: Capture a Ship in the Red Sea 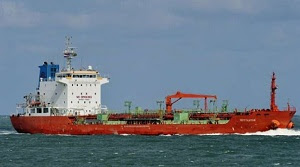 
In the early hours of 4 July, the MT Motivator reported it was under small arms fire from a pirate attack in the northern Bab Al Mandeb area in the southern Red Sea. After notification of this attack, attempts were made to make contact with the Motivator but to no avail. The hijack was confirmed early on 5 July.

The MT Motivator, deadweight 13,065 tonnes with a crew of 18 Filipino nationals on board, is a Marshall Islands Flagged chemical products tanker loaded with lubricants oil. EU NAVFOR is monitoring the situation.

This is, to my best recollection, the first capture of a major ship in the Red Sea by Somali pirates.

An earlier post on the shift of Somali pirates to the Red Sea here. UPDATE: An earlier warning from the U.S. Navy dated June 9, 2010:


Pirates in the Gulf of Aden are increasingly operating at night and could expand their raids into the Red Sea, the U.S. Navy said on Tuesday

The Bahrain-headquartered Fifth Fleet said it had warned merchant vessels about changes in pirates' tactics following bad weather and the stepped-up presence of international navies.

As noted there, the weather off Somalia currently is not very good for small boat (read "pirate") operations - the weather in the southern Red Sea better (see here): From top to bottom: Off east coast of Somailia (Indian Ocean), Gulf of Aden, Southern Red Sea