This Will Drive Liberals Crazy: Controlling Borders Through State Militias? 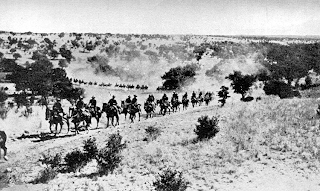 
So, the militias organized and armed by a state may go to war when the state has been invaded or is in imminent danger. This is clear under Article I, and plainly justified when the federal government has deliberately failed to protect against invasion as required by Article IV. As Joseph Story explains in his treatise on the Constitution, the prohibition against states engaging in war is "wisely" limited by "exceptions sufficient for the safety of the states, and not justly open to the objection of being dangerous to the Union."

References: U.S. Constitution, Article I, Section 10: "No State shall, without the Consent of Congress , , , engage in War, unless actually invaded, or in such imminent Danger as will not admit of delay."

Article IV, Section 4: "The United States shall guarantee to every State in this Union a Republican Form of Government, and shall protect each of them against Invasion; and on Application of the Legislature, or of the Executive (when the Legislature cannot be convened) against domestic Violence."
Second Amendment: "A well regulated Militia, being necessary to the security of a free State, the right of the people to keep and bear Arms, shall not be infringed."
Interesting argument.

I like it when the Second Amendment gets brought into play in this context.

A well-organized, state-controlled militia - exactly the what many liberals is the only meaning of the Second Amendment. Like this professor:


"The Second Amendment was simply a promise that the national government would not abolish the state militias," Finkelman said last week. The amendment states that "A well regulated Militia, being necessary to the security of a free State, the right of the people to keep and bear Arms, shall not be infringed."
"Only if you're in a well-regulated militia, do the people have a right to keep and bear arms," he said.

So, professor, how do you like Mr. Hartwell's argument?

Probably by invoking Timothy McVeigh and these creeps. As in this "news" story:


Critics point out that the National Guard already provides for the state's military needs. They worry a militia would stoke extremism.

"Have they heard of the Oklahoma City bombing?" said Joseph Thai, a constitutional law professor at the University of Oklahoma, adding that a militia could "throw fuel in the fire of radicals."