Update on Damaged Tanker in Strait of Hormuz 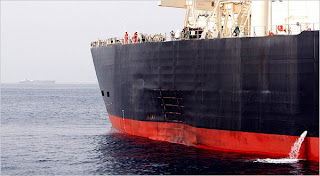 
With the tanker docked in the United Arab Emirates, the owner, Mitsui O.S.K. Lines, and port officials puzzled over precisely what had shattered windows on the vessel, knocked off a lifeboat and punched a dent into its hull. The damage was apparently inflicted early Wednesday morning in the Strait of Hormuz, a passageway for shipping much of the world’s oil from the Middle East.
Mitsui officials said that crew members on the ship, the M. Star, had seen a flash and heard an explosion. They also dismissed earlier speculation by officials in Iran and Oman that the damage had been caused by a “freak wave.”