Suing Arizona:Silly Move by a Joke of an Administration

You can read the pleading here: 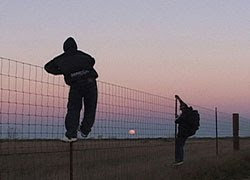 Apparently, the "interests" of the federal government include allowing "sanctuary cities" and more or less open borders and forcing legitimate immigrants to jump through hoops not required of those who sneak across borders. UPDATE: To clarify, I mean it seems unusual for an administration to argue that its interest in not enforcing the law of the land somehow rises to an act of supremacy that forbids states from enforcing the law of land. Heck, if you don't like the federal law on which the Arizona statute is based, Mr. President, why not ask your gang in the Congress to repeal it and replace it with something more to your liking?

I told you this would be fun, and here, here, here.


Brennan expressly cited "the predominance of federal interest" in immigration (as opposed to employment law), and the federal government's complaint against Arizona alleges, plausibly, that the state law will impose burdens on legal aliens.But he also makes clear that the power to pre-empt or sanction state laws in an area of federal interest rests with Congress, not the president. This would seem to suggest that if the Arizona law is consistent with federal law and Congress has not expressly barred action by states, the Arizona law should stand.

A large part of the administration's argument, by contrast, is that the Arizona law is inconsistent with federal immigration policy--i.e., with the executive branch's decisions about how to enforce laws passed by Congress. An important question for the court, then, will be whether Congress has delegated its authority to pre-empt state laws by granting discretion over law enforcement to the president.

In other words, this is a case about the balance of power within the federal government, with the Obama administration on the side of expanding the authority of the executive branch.