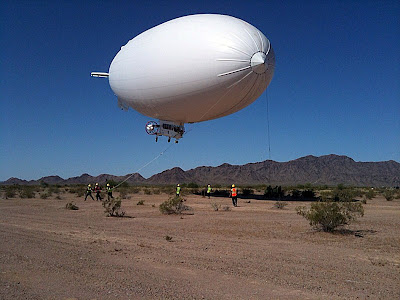 Reported as A Navy Blimp is Expected to Help the Clean up Oil Spill Process :


The clean up oil spills process continues in the 77th day with a new technology. An enormous navy blimp MZ-3A Airship slowly made its way from Yuma, Arizona and is expected to arrive today in the Gulf Coast at Jack Edwards National Airport, to help clean up the disastrous oil spill, according to a press release from Deepwater Horizon Response External Affairs. The Coast Guard requested the support of the 178-foot-long U.S. Navy airship to detect oil, assist in coordinating skimming efforts and to monitor any threat to marine mammals and other wildlife that may be in distress.

The advantage that the blimp has over the helicopters is that, it can stay aloft continuously for 12 hours while monitoring a large swath of territory at low speed, and would also far more economical than the helicopters, according to the US Navy. The problem is that the blimp can’t go up in rough weather and that could mean significant no-fly periods for the MZ-3A Airship.