Reported as Seychelles serves up African justice for Somali pirates:


The Seychelles convicted 11 Somali pirates Monday in the first-ever ruling of its kind for an archipelagic nation off the coast of east Africa best known for its white sand beaches and crystal blue water.

Eight of the Somalis were convicted for committing an act of piracy and the other three for aiding and abetting an act of piracy. They were all acquitted on five other charges related to "acts of terrorism," but each will serve 10 years in prison, said a statement issued Monday by Seychelles' Supreme Court. 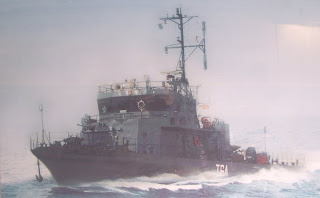 As noted here, the pirates tried to hijack a Seychelles Coast Guard boat.

Not a wise career move.

Though their living conditions may actually improve in jail.

Report of the attack on the Seychelles boat Topaz here. Photo shows SCG Topaz when it was in Indian service
Posted by Mark Tempest at 7/27/2010 10:25:00 PM