I Want to Know the Rest of the Story: Nigeria reports seized Iranian arms shipment to UN

Things that make you go "Hmmm."


Nigeria has reported its seizure of a shipment of arms from Iran to the United Nations Security Council.

The Nigerian authorities discovered the weapons, including rocket launchers and grenades, last month in containers labelled as building materials.
***

Iran said the weapons were the subject of a "misunderstanding", which had been cleared up.
***
Iran's Foreign Minister Manouchehr Mottaki, who visited Nigeria last week, said: "A private company which had sold conventional defence weapons to another country in West Africa had transferred the shipment via Nigeria which raised some doubts with relevant officials."
*** 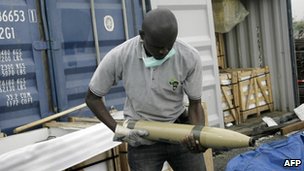 The France-based shipping company CMA CGM which transported the shipment said it was hidden in containers labelled as building materials and attempts were made to send it to Gambia before the Nigerian police seized it.
Iran is under UN sanctions because of its nuclear programme and is banned Iran from supplying, selling or transferring arms. Tehran denies accusations that its programme is aimed at developing nuclear weapons.

Reports that the stuff was possibly bound for Gaza here:


Nigeria's secret service said on Tuesday it had intercepted 13 containers of weapons from Iran in what Israeli defense sources believe may be part of a new smuggling route from Iran to Hamas in Gaza.

Rocket launchers, grenades and other explosives camouflaged as building material were seized in the Nigerian port of Lagos after being unloaded from an Iranian ship.
Nigerian media reports said the ship, which came from Iran, docked in Lagos' port for a few hours only, unloaded 13 containers and sailed on.
The bill of lading said the shipment consisted of building materials, Nigerian State Security Service spokeswoman Marilyn Ogar said.
"On opening the first container, the service operatives discovered rocket launchers, grenades and other explosives," Ogar said, adding the weapons were concealed among crates of floor tiles.
***
According to the Nigerian media, the clearing agent in charge of unloading the containers from the ship offered to bribe the Nigerian customs officers to transfer the containers to an off-dock terminal, where they could be screened outside the port. The customs officials alerted the security services, who ordered the containers opened.

Some interesting thoughts here, which notes that the munitions could just as easily be intended tor African Iranian clients:


There is every cause for concern therefore when arms and ammunitions such as the Apapa cargo find their way into our shores. That is why, every effort must be made to track the importers and identify them for the benefit of the concerned public and peace of the country. The government must resist pressure to enter into a conspiracy to internationalise this episode without first asking for and obtaining credible evidence before embarking on such a position.

There are claims made by Israeli officials that the arms came from the Jewish nation's arch foe Iran, and that they were destined for its implacable enemy Hamas in Gaza. So far, we have not seen evidence to corroborate the claims, and Nigerian officials have made no comment regarding them. Questions as to why such arms would take the tortuous route through Nigeria, if indeed Israel's claims are worth looking into, and why it took three months to bring the facts to the public's attention, should be answered by the ongoing investigation. If on the other hand it is true as being alleged that prominent Nigerians are behind the imports, the government has the bounden duty to expose them. It is only by doing so that it would have a deterrent effect, build a safer environment for the citizens and put a halt to the disturbing trend of easy access to heavy weaponry among dissident groups and militants in the country.

The War with Iran continues.

Email ThisBlogThis!Share to TwitterShare to FacebookShare to Pinterest
Labels: Nigeria, The War with Iran, UN Sanctions Against Iran