A Thai navy patrol ship taking part in an anti-piracy mission off the Somalia coast on Thursday rescued 23 crewmen from a Thai trawler which was robbed by pirates and then sunk by gunfire, the secretariat of the navy said Friday.

The source said the operation centre of the Thai anti-piracy naval force received a report on Nov 2 about 5pm (local time) that Sirichai Nava 11, a Yemen-registered Thai fishing vessel, had been attacked and seized by Somali pirates about 15 nautical miles from the coast of Yemen.

This was 360 nautical miles from where the Thai naval operations centre was located. 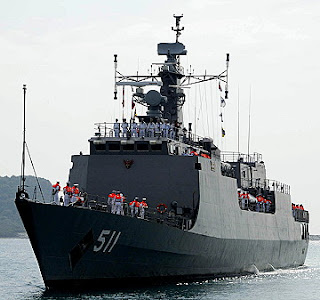 HTMS Pattani, one of the two Thai ships taking part in the 28-country anti-piracy mission, was immediately despatched on a rescue mission.

HTMS Pattani arrived in the attack area on Nov 3 about 7am (local time), but did not see the Thai vessel. A helicopter search was then launched.

About 12.45pm the next day, the helicopter crew spotted an oil slick, flotsam and survivors.

They plucked from the sea seven Thai and 15 Cambodia crew and one Yemeni policeman. Still missing were one Thai crewman and four Yemeni policemen.

According to an account given by the rescued crewmen, the Thai fishing vessel was attacked and seized by 10 armed Somali pirates who arrived on a speed boat on Nov 2.

After the seizure, two of the pirates left on the speed boat while eight others took control of the Thai boat and forced it to sail toward the Somali coast.

About 1am on Nov 3, the trawler was hit by gun shots from another boat of an unknown nationality and sunk.

The crewmen were left drifting in the sea until they were rescued by the Thai patrol ship. They did not know what happened to the eight pirates.