Planning for that Zombie Attack: Littoral and "Brown Water" Defenses


It says something about our modern culture that tales of the dead rising to feast on the flesh of the living remain popular.

Though dating back (Wikipedia says) to African Voodoo cults (and, I suspect, but am too lazy to research, to almost all cultures at some point), for many of us of a certain age, Night of the Living Dead was our introduction to the modern "zombie" world.
Since then, there are many variations on the theme that have followed, up to and including the "graphic novel" (formerly known as a "comic book") inspired The Walking Dead now a hit on AMC.

I kinda thought Shaun of the Dead was going to blow the top off these things, but .... then came "zombie yoga."

Now many of us have sacrificed hundreds, if not thousands, of electrons to discussing defenses against zombies (see here and here).


Well, naturally, from time to time it is necessary to revisit these defenses against the "Zombie Threat." Most of these take a land-based approach to dealing with the problem.

For example, Chuck Z has some thoughts at here:


Once the main pandemonium has passed, it's time to consider moving elsewhere. You're going to need a vehicle. Forget about popping by the local Ferrari dealership. Forget about building the apocalypse vehicle, surrounded by flame-throwers, flailing chains, and chainsaws. You do need a SOLID vehicle, one with large fuel tanks, and as few (and hopefully armored) windows as possible. You don't need an RV. You need a panel van, or something with a large enough enclosed space to sleep comfortably and haul supplies. Find a Cargo Van, Short School Bus (lots of windows, but higher up), UPS truck, or even better, an armored van.

I believe that this land-based approach is not as sound as a littoral or brown water zombie defense approach, which maximizes mobility, security and comfort.

Now, in the classic land-based zombie defense posture, as repeated by Chuck, you seek a remote house and board yourself into it, while awaiting the inevitable zombie horde pounding on the windows and doors while you expend your ammo, food and foul water. As Chuck says:


Speaking of getting away, you are going to need to get away from the city, and preferably away from the suburbs. Too many zombies. Of course, everyone else will be thinking about that, and highways will be ridiculously crowded with the living and the undead. Best to stay away until the situation stabilizes. So you'll need a local place to stay. The fewer windows, the better. Roof access is a plus. Get water catching buckets/tarps/etc up early. Board up the 1st floor windows from both sides, and bar the doors. Haul in the pets (they are your loving family members, as well as an emergency food source.) Blackout curtains (or foil) on all the windows for night time. Keep the family in one room for sleeping, and bar that door too.

Oh, my! This is totally wrong-headed.

How much better to head for the local lake, river or ocean marina and "adopt" a boat on which you load, food, water, ammo, weapons and . . . fishing gear. While the zombies gather on the shore groaning at you, you proceed to open water and drop anchor (Note: water should be at least 20 feet deep - so zombies can't "piggy back" their way on board). While you wait out the zombies, you fish, drink beer and have the comforts of home. Practice "repelling boarders." Should the zombies show or develop nautical skills, weigh anchor and move to another, less infested area.

I do have a few suggestions. First, get a real boat that you can live on for several weeks or months.  Like these:


Second, make sure that you bring a water purification system with you or that the boat you liberate for littoral use has a "reverse osmosis" system for converting sea water to fresh water. With water, fishing gear and some common sense, you ought to be good to go.

Third, while I am unclear on the amphibious capabilities of zombies, I suggest getting a good fish finder with "zombie location" capability  - just in case.


UPDATE: Then there are those anti-zombie riverine forces on patrol: 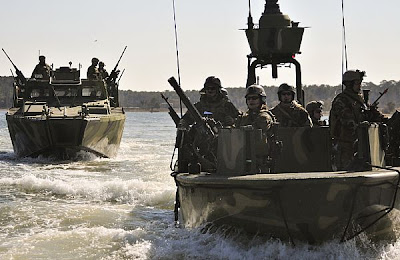