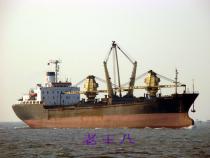 Pirates hijacked a cargo ship with 29 Chinese sailors aboard in the Arabian Sea and told the shipping company they were taking it toward Somalia, Chinese officials and state media said Saturday.

The attack came just two days after another 17 Chinese sailors returned home after being held by Somali pirates for four months. It also highlights the spread of piracy to areas outside the Gulf of Aden, a hijacking hot spot now patrolled by international forces.

An official with the China Marine Rescue Center, surnamed Yang, said the Panama-flagged ship Yuan Xiang was attacked Friday night. The Ningbo Hongyuan Ship Management Company reported the pirate attack to the rescue center just before midnight and said the pirates were taking the ship toward Somalia, the state-run Xinhua News Agency reported.
***
Xinhua said the attack occurred in an area outside the region where China's navy is part of a multination force working together to patrol the Gulf of Aden — one of the world's busiest shipping lanes — and other waters off Somalia where pirates operate.