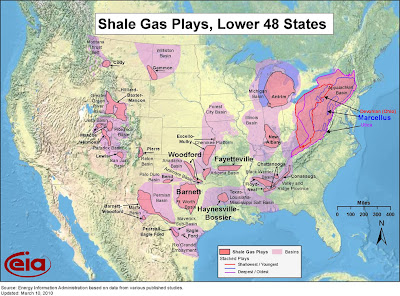 A paper, sponsored by the U.S. Department of Energy from the James A. Baker III Institute for Public Policy at Rice University, "SHALE GAS AND U.S. NATIONAL SECURITY":


The Baker Institute study "Shale Gas and U.S. National Security," sponsored by the U.S. Department of Energy, investigates the role that U.S. shale gas will play in global energy markets as global primary energy use shifts increasingly to natural gas. Specifically, the study concludes that shale gas will diminish the petro-power of major natural gas producers in the Middle East, Russia and Venezuela, and it will be a major factor limiting global dependence on natural gas supplies from the same unstable regions that are currently uncertain sources of the global supply of oil. In addition, the timely development of U.S. shale gas resources will limit the need for the United States to import liquefied natural gas for at least two decades, thereby reducing negative energy-related stress on the U.S. trade deficit and economy.

But, hey, don't take this summary as truth when you can read the source document by downloading it from here.

Here's an interesting section that points out how global energy markets work (click on it to enlarge it): 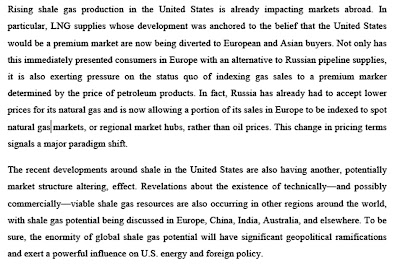 Not only is shale gas important for U.S. national security, it's providing a benefit to Europe and Asia.

Damn right it will "have significant geopolitical ramifications."

And we have a lot of it, as set out here:

Enough for 110 Years of Use

At the 2009 rate of U.S. consumption (about 22.8 Tcf per year), 2,552 Tcf of natural gas is enough to supply approximately 110 years of use. Shale gas resource and production estimates increased significantly between the 2010 and 2011 Outlook reports and are likely to increase further in the future.

So, why, instead of screwing around with ethanol and really expensive electric cars, are we not working hard to produce vehicles powered by shale and other natural gas?


Although the U.S. Energy Information Administration's (EIA) National Energy Modeling System (NEMS) and energy projections began representing shale gas resource development and production in the mid-1990s, only in the past 5 years has shale gas been recognized as a "game changer" for the U.S. natural gas market. The proliferation of activity into new shale plays has increased dry shale gas production in the United States from 1.0 trillion cubic feet in 2006 to 4.8 trillion cubic feet, or 23 percent of total U.S. dry natural gas production, in 2010. Wet shale gas reserves increased to about 60.64 trillion cubic feet by year-end 2009, when they comprised about 21 percent of overall U.S. natural gas reserves, now at the highest level since 1971. Oil production from shale plays, notably the Bakken Shale in North Dakota and Montana, has also grown rapidly in recent years.

You can thank the engineers who developed the technology and techniques to make this possible.
Posted by Mark Tempest at 8/03/2011 08:47:00 AM