Shale Gas: Who Objects to Poland's Exploration and Development?

For some background, you might want to review Shale Gas and U.S. National Security and the links therein. We'll be talking about this during Midrats today at 5pm Eastern.

Buried in the Rice report is an interesting projection that Europe outside of Russia has shale gas and that the country with the highest projected level of shale gas is Poland - estimated to 120 trillion cubic feet of this gas. This is about 55% of the total estimate for Europe.

This is also a threat to the leverage that Russia hoped to invoke as Europe's largest supplier of gas.


Russia made no secret about its desire to leverage its position and create a cartel of gas producers -- a kind of latter day OPEC.

Poland - it's always Poland for Russia, isn't it? - Poland has gas - perhaps lots of shale gas. Russia's OPEC-style price fixing cartel will fail if Poland develops its own resources, especially in conjunction with development of U.S. gas shale.

And Poland is moving to develop its gas shale - with Chevron among others:

In an area becoming a new hotbed of shale natural gas exploration activity, oilfield services firm Halliburton (NYSE: HAL) has been awarded an integrated services contract from supermajor Chevron for shale natural gas exploration in Poland.
Work on Chevron Polska's initial shale gas exploration drilling program is expected to begin in the fourth quarter and the contract award is for three years, with extension opportunities. Chevron was awarded licenses to explore for unconventional gas resources in the area in December 2009.
The plan calls for Halliburton to provide services including drilling services, mud logging, cementing, coiled tubing, slickline services, well testing, completion and hydraulic fracturing. Halliburton will support the project with project management services.
In June 2010, the company announced it had also acquired rights to explore for natural gas in the Grabowiec concession, located in southeastern Poland.
Present in Poland for more than 15 years, Halliburton performed the first-ever shale hydraulic fracturing operation in Poland for PGNiG in August 2010.


The rush for shale gas in Poland is attracting some of the world’s biggest energy companies, giving the country hopes of energy security and strengthening ties with the United States.

Recent finds in northern Poland appear to confirm what experts have suspected for years - that Poland has Europe’s largest reserves of shale gas.  The news promises to encourage what has become a feeding frenzy of major gas companies and Polish hopes of energy independence from Russia.

***Poprawa says it will be several years before anyone knows exactly how much gas Poland has, and at least a decade before large-scale production can begin.  But in the mean time, exploration concessions have been granted to some of the biggest energy companies in the world.

“We have on our market real majors, the biggest companies globally," he said.  "We have here Exxon, Chevron, ConocoPhillips, Total - this is kind of unique, really.  This place a couple of years ago was empty.  Now everybody from the world comes here to make their exploration.”

Of course,suddenly there are voices deriding this ambition of the Poles, as noted in
Resistance to Poland’s Shale Gas Exploration Plans Emerging:


Interest groups that want to block production of gas from shale rock will lobby at the European Union for rules that would make shale gas output unprofitable, a Polish member of the European Parliament said.

“In the fall, we expect more informational activity to encourage legislative work against shale gas,” Pawel Kowal told a press conference. “It’s not possible, for political reasons, to introduce a pan-EU ban on shale gas. But it’s possible to introduce regulations that would make it unprofitable.”

Poland’s Prime Minister Donald Tusk has called shale gas a “great opportunity” for Poland. The unconventional gas industry, while still in its infancy in Poland, could create thousands of jobs and, eventually, generate export revenue. If it turns out to be economically viable to extract, it may free Poland from dependence on Russian natural gas supplies.

The U.K. government in July rejected calls for tough new controls on the technology. France in June became the first country to ban it completely.

Mr. Kowal, in 2006-2007 a deputy foreign minister in the conservative cabinet of Jaroslaw Kaczynski, said Poland should take steps to prevent rules that would derail Warsaw’s plans for shale gas.

“Compared to other sources of energy, extracting shale gas isn’t particularly dangerous,” he said. “But lobbying against it may come from various sources. Disinformation will lead to objections in local communities.”

Russia’s OAO Gazprom has called shale gas “a bubble” and “a danger to drinking water.”

So, who could be behind this bad-mouthing of Polish energy independence? Follow the money that will be lost to Poland's (and the rest of Europe's) current suppliers and you'll have an answer.

Stay tuned to see how this unfolds.

Geopolitics. Oh, by the way, Poland isn't the only place that has gas shale: 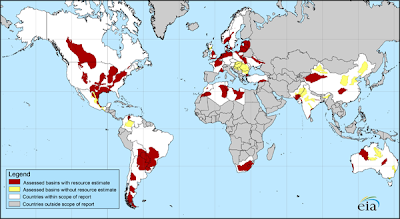